Goldman Sachs recently released market research that suggests humanoid robots, like the recently announced Tesla Bot, could represent a $150 billion per year market over the next 15 years. That’s as much as the market for electric cars, an impressive result to achieve in a very short time considering how long robots have been around. Tesla CEO Elon Musk hinted earlier this year that Tesla’s robotics arm could one day be worth more than its automotive business.

The humanoid robot concept has grown in importance in recent years, with new players such as Xiaomi and Tesla starting to build new prototypes. Indeed, the idea that robots will take over menial tasks and reduce labor costs has been around for a long time, but it has taken on a different meaning. Robots have already taken over many tasks and many jobs, especially in industries, but we are talking here about robots built and programmed for specific tasks, not general purpose humanoid robots that science fiction sold us.

But from time to time, we see a resurgence of humanoid robots and some companies come together around projects, like Honda Asimo. Today, Tesla is leading a new renaissance of humanoid robots with the Tesla Bot (Optimus) project. This revival is different, as Tesla seems intent on not only delivering a new robot, but also its manufacturing power behind it, making Optimus a widely available product. Goldman Sachs said the launch of Tesla’s humanoid robot prototype has reignited the debate about the financial opportunities for such innovation. 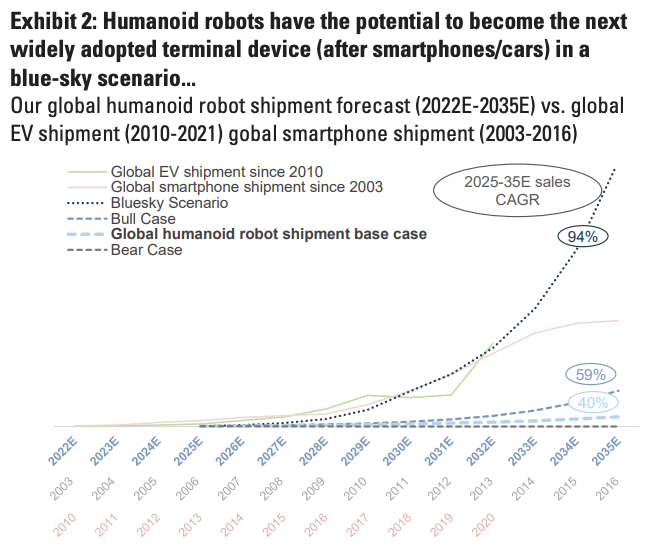 Investment in humanoid robots is huge and we estimate that in 10 to 15 years, a market of at least $6 billion could be reached to fill the 4% of the manufacturing labor shortage in the United States. United in 2030 and 2% of global demand for elderly care in 2035, Goldman Sachs wrote in its report. In this report, the company estimates that the market for humanoid robots could be worth $154 billion by 2035, almost as much as the market for electric cars, matching Tesla CEO Elon Musk’s forecast .

If barriers to product design, use case, technology, affordability, and mainstream acceptance are fully overcome, we could see a market of up to $152 billion by 2035 in an optimistic scenario (close to the global automotive market electricity and one-third of the global smartphone market from 2021), suggesting that labor shortage issues such as in manufacturing and care for the elderly will be solved to a large extent, the investment bank explained.

In a column published in the magazine “China Cyberspace” by the Chinese regulator Cyberspace Administration of China (CAC) in August, Musk presented the potential uses of the future Optimus robot from Tesla. He said the robot would one day “serve in millions of homes”, performing tasks such as “taking care of the elderly”. Musk also tried to sell his robot in China as an autonomous agent capable of providing care for the elderly, looking after the home and working in factories. China is one of the countries where elderly care is very important.

Tesla robots are initially positioned to replace humans in repetitive, boring and dangerous tasks. But the vision is that they can serve millions of homes, like cooking, mowing lawns and caring for the elderly. Optimus will be about the same height and build as an average adult and will be able to carry or pick up heavy objects, walk quickly with small steps; and the screen on his face is an interactive interface for talking to people. We’ll believe it when we see it, the American billionaire wrote in his tribune.

Analysts say China’s population is aging rapidly due to declining birth rates, making care for the elderly a priority for Beijing as it strives to ease the country’s demographic crisis. “Maybe in less than a decade people will be able to buy a robot for their parents as a birthday present,” Musk predicted. Earlier, in 2021, at the first inaugural event of the robot, Musk said that Optimus will be built using the same sensors and chips as Tesla’s self-driving cars.

It is about 1.77m tall and has a screen with relevant information on where the head should be. In addition, the Autopilot system’s cameras are on the robot’s head. Despite this, he only weighs about 60 kg, but can lift 70 kg and carry 20 kg. It can also move at a speed of 8 km/h. According to a recent report by Markets and Markets, the humanoid robot market will be worth $1.5 billion in 2022 and is expected to reach $17.3 billion in 2027. These estimates are less ambitious than Goldman Sachs, but indicate all the both positive growth.

Markets and Markets analysts attribute the rise of robots with advanced features to the retail and medical sectors. However, the market is currently constrained by the high cost of R&D in this sector. as technology advances, it is impossible to predict how far the sector will grow. Also, it is worth noting that while Goldman Sachs admits that Tesla is behind the resurgence of humanoid robots, the company instead recommends investing in motion component suppliers to take advantage of this new market.

According to critics of the report, Goldman Sachs’ analysis seems “exaggerated”. That said, they don’t think it stops them from being optimistic. They say they agree with the consensus that the Optimus prototypes Tesla unveiled in September weren’t impressive, but note that this is partly due to the company’s strategy to focus on manufacturing the robot for mass production.

I think this approach will lead to rapid improvements in the field of humanoid robots. I see the Tesla Bot reaching an interesting level of use in the next 4-5 years, and in 10 years it will certainly reach a level that will make it a versatile robot capable of performing a wide that range of command tasks, says one reviewer. .

What do you think of Goldman Sachs’ forecasts for the humanoid robot market? Are they realistic?

Do you think robots could take care of elderly people independently in the future?

Elon Musk says Tesla’s humanoid robot is the most important product the company is working on, and could eventually overtake its automotive business

Elon Musk is trying to sell Tesla’s Optimus robot in China as an autonomous agent capable of caring for the elderly, doing housework and working in factories