Nvidia is turning its AI upscaling technology to a new target: blurry web videos. Announced this week during its presentation at CES 2023, RTX Video Super Resolution is designed to upscale video viewed through the Chrome or Edge browser on a PC to the equivalent of 4K. The catch is that you’ll need to have a fairly modern Nvidia GPU to take advantage of this feature, which only the latest 30 and 40 series GPUs should support when it’s released next month.

NVIDIA Studio is a platform for content creators with over 110 creative apps with RTX GPUs, provides long-term stability with NVIDIA Studio drivers, and includes a powerful suite of Studio apps – Omniverse, Canvas, Broadcast, and RTX Remix.

Creators can access all of this with any RTX GPU, including the new 40-series laptops and GeForce RTX 4070 Ti graphics cards, powered by the ultra-efficient Ada Lovelace GPU architecture, introduced today at CES .

The heart of the Studio platform is built on NVIDIA Omniverse, a platform where creators can connect their 3D applications and collaborate in real time. Omniverse expands with improvements to Blender, a new set of experimental generative AI tools for 3D artists, and thousands of new free general scene rendering assets available in the Omniverse Create Content Browser.

GeForce RTX GPUs dramatically accelerate 3D, video, and broadcast workflows, along with a wealth of AI tools, with dedicated hardware for ray tracing, AI, and video encoding. The new laptops with GeForce RTX 40-series GPUs use the NVIDIA Ada Lovelace architecture – with support for DLSS 3, AV1 and more – and fifth-generation Max-Q technologies for maximum performance and efficiency .

These new laptops advance performance over the last generation, and a massive increase in efficiency allows OEMs to include more powerful GPUs in thinner and more portable systems. NVIDIA Studio laptops are built for creators, with the right combination of hardware for creative workflows, color-accurate displays, and pre-installed Studio drivers and software.

The Razer Blade laptop boasts an upgrade from the RTX 40 series with a GeForce RTX 4090 laptop GPU. The 16-inch, HDR-capable, dual-mode mini-LED display boasts a peak brightness of 1000 nits, which pairs perfectly with the Creator mode that enables native ultra-high definition + 120Hz resolution.

MSI’s Stealth series launches with a wide range of Studio options. With 14-inch to 17-inch models and up to a GeForce RTX 4090 laptop GPU, creators can choose the laptop that best suits their needs.

Powered by the GeForce RTX 4070 Laptop GPU, the ASUS Zenbook Pro 14 introduces a new level of performance for a 14-inch laptop.
The increased efficiency of RTX 40-series laptop GPUs and fifth-generation Max-Q technologies deliver high performance in laptops as thin as 14-inches, with up to GeForce RTX 4070 laptop GPUs , a new tape . An example of this is the ASUS Zenbook Pro 14 OLED, which features a GeForce RTX 4070 Laptop GPU in an ultrathin 14-inch design, and is accompanied by a brand new NanoEdge Dolby Vision 2.8K 120Hz OLED display.

For artists who prefer to work from their desk, the new GeForce RTX 4070 Ti graphics card, available from Thursday January 5, offers incredible performance, up to 15% faster than a GeForce RTX 3090 Ti in 3D rendering. Like the RTX 4090 and 4080, the latest RTX 40 series GPUs have two AV1 video encoders. When enabled in leading video editing and live streaming applications, such as Adobe Premiere Pro (via the Voukoder plugin), DaVinci Resolve, OBS, and Jianying, export times are cut in half with improved video quality. 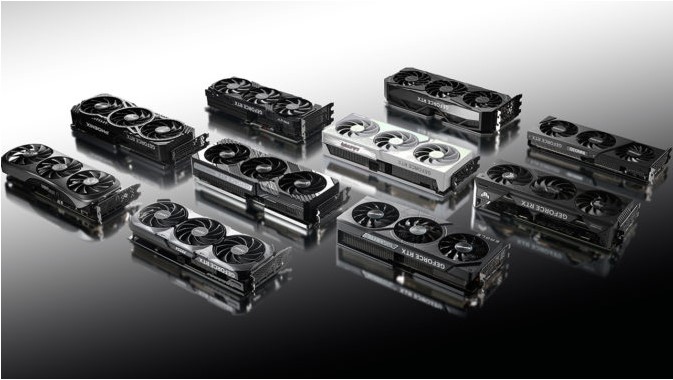 3D creators experience up to a 70% performance boost with the GeForce RTX 3070 Ti in popular applications like Autodesk Maya, Blender, Chaos V-Ray, Epic Games Unreal Engine, and Unity. All creators will benefit from the new fourth generation of Tensor Cores for AI tools, which deliver up to 2x the performance of the previous generation.

NVIDIA RTX GPUs unlock exclusive software for creators: Omniverse, RTX Remix, Canvas, and Broadcast. They will all be updated at the beginning of the year. Based on the USD framework, Omniverse allows artists to connect their favorite tools from Adobe, Autodesk, Epic Games, SideFX and more. Creators can see their scenes come together instantly without having to go through a lengthy import or export process. Edits are made in real time across connected apps, whether an artist is working in multiple apps at once or collaborating with another artist halfway around the world.

The alpha branch version of Blender, part of a series of Omniverse updates, is now available in the Omniverse Launcher. It allows users to adjust geometries, generate automatic UVs, and remove high-resolution CAD data for more usable polycounts.

Performance updates to Audio2Face, Audio2Gesture, and Audio2Emotion – powerful AI tools in Omniverse – enable instant, realistic character animation. The Experimental AI Tools ToyBox is now available in the Omniverse Extension Manager. Thousands of new free 3D assets have also been made available for users around the world to develop and create in Omniverse.

RTX Remix, developed at Omniverse and used to create the malicious Portal with RTX, is nearing its early access. Nicolas “NykO18” Grevet – the original creator of Portal: Prelude – is using RTX Remix to remaster his unofficial 2008 prequel to Portal. Grevet is working with modder David “Kralich” Driver-Gomm to modernize the assets and lighten the game with complete and stunning ray tracing. Portal: Prelude RTX will soon be available for free download from mod sites like ModDB and Nexus Mods.

Canvas lets designers paint by material, rather than color, using simple brushstrokes and AI to quickly conceptualize a beautiful image. Canvas is getting a new 360 image feature, which will be available in an upcoming free update for RTX users. This will help artists create panoramic scenes and export them to any 3D application for use as environment maps. Such maps are used to change the ambient lighting of a 3D scene and remove reflections for added realism.

Later this month, Broadcast will add a new eye contact feature that changes the position of a subject’s eyes so they appear focused on the camera, as well as a new vignette effect. The update also improves the popular virtual background feature, adding time information for better stability. Virtual background enhancements are in the recent 29.0 release of the OBS Studio software, and the SDKs will be updated for developers later this week.

Nvidia unveils the Ampere A100 GPU, an artificial intelligence chip, with 54 billion transistors and capable of running 5 ptaflops of performance

NVIDIA Blocks Cryptocurrency Mining on RTX 3080 and 3070 Cards, to Make Them More Accessible to PC Gamers