Tesla has come down from a high pedestal over the past year, after facing headwinds and suffering over the way CEO Elon Musk privatized social network Twitter. Tesla stock has lost more than $700 billion in value, Elon Musk’s takeover of Twitter hasn’t helped, and investors have lost faith in the electric car maker’s ability to deliver true self-driving that cars. Investors also seem to realize that the company is first and foremost a car manufacturer and that its boss is no superhuman. The year 2023 is likely to be very eventful for Tesla.

For several years, the massive rise in Tesla stock has mesmerized, excited and shocked Wall Street. Despite the company’s mixed performance, its market capitalization at one point in 2021 surpassed $1.2 trillion, more than most other automakers combined. But in 2022, this meteor was extinguished. The company lost 71% of that value, more than most companies in the industry. That’s why the wealth of its energetic boss Elon Musk has decreased by more than 200 billion dollars and he is no longer the richest person in the world.

However, the latest blow came on January 3, after Tesla missed analysts’ expectations for deliveries for the third consecutive quarter and announced that the gap between production and deliveries had widened, suggesting a slowdown in demand for its electric vehicles. The company lost 12% of its market value – about $50 billion, the market capitalization of Ford Motor Company – in one day. But even once optimistic investors now doubt that Musk will be able to fulfill his promise to produce 20 million electric cars a year by 2030. 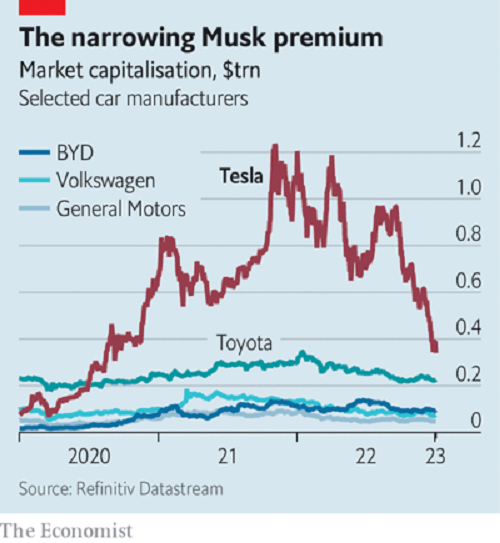 They also doubt that Autopilot, Tesla’s advanced driver assistance system (ADAS), will soon become a revolutionary fully autonomous driving system. However, according to some analysts, the main reason behind the state of Tesla shares is that investors realize that the company is first and foremost a car manufacturer and that its boss is not a superman. Indeed, Musk has always viewed his Tesla as a tech company, a peer of digital giants like Alphabet or Meta, not old-economy juggernauts like Toyota or Volkswagen.

For a while, the market did the same, first when tech stocks soared amid the pandemic-era boom of all things digital, then when they crashed a year later. ago, after their growth began to slow and rising interest rates devalued future earnings promises. In recent months, however, Tesla’s stock price has suffered a sharper correction than big tech companies like Meta, Apple or Alphabet. This coincides with its more mundane tribulations as an automotive company.

Having managed to avoid the worst supply chain disruptions of the pandemic, Tesla would have been caught up in China’s chaotic departure from the zero-Covid policy; its large factory in Shanghai hit by virus-related shutdowns. And with a path for industry transition, it now faces stiff competition from established rivals and some newcomers it inspires. Days after Tesla’s disappointing results were released, Volkswagen unveiled its ID.7 at CES in Las Vegas, a competitor to Tesla’s entry-level Model 3 sedan.

In addition, analysts added that EV buyers, meanwhile, are less willing than early adopters to overlook Tesla’s questionable build quality, Autopilot reliability and upgraded version, FSD (Full Self-Driving). Tesla’s natural owners, among them wealthy progressives, are less willing to ignore Musk’s libertarian Twitter antics, which he bought in October and greedily denigrates — especially since they now have the option of between the many alternatives of electric vehicles to clear your conscience.

In other words, Tesla is no longer the only player in town, and certainly doesn’t have a tech glove. But for an electric car manufacturer, it’s still impressive. In 2022, it delivered 1.3 million vehicles, 40% more than the previous year, and opened two new assembly plants. He’s building a smaller, cheaper car and will begin delivering his much-anticipated Cybertruck pickup this year. And it’s still worth about $343 billion, about as much as the other three biggest automakers combined.

Tesla isn’t the only company to see its stock value plummet. The stock market as a whole fell in 2022, and in the automotive sector, all manufacturers saw their shares fall. Major players like General Motors and Ford fell about 40%, and startups like Rivian and Lucid lost more than 80%. All automakers face the same headwinds as the economy in general. They also started 2022 with spare parts shortages that kept dealerships empty.

They ended the year with extremely high car prices that could put off potential customers. According to analysts, auto sales in the United States will fall in 2022 to their lowest level in a decade. And Tesla’s sales may increase by 40% compared to 2021, but they remain below ambitious growth targets and analysts’ expectations. And as mentioned above, competition is intensifying. At the upper end of the market, household names such as Mercedes-Benz, BMW and Audi, as well as Lucid, Rivian and Polestar, are starting to eat into market share.

“We have a bunch of cars that rival Tesla in terms of how performance-oriented they are, they’re luxury,” said Autotrader editor Brian Moody. Meanwhile, vehicles like the Kia EV6, Ford Mach-E, and redesigned Chevy Bolt are starting to tackle the mass EV market. Competition is also intensifying in China, an important market for Tesla and its rivals. Tesla still represents 65% of electric vehicle sales in the United States. But that percentage is falling, which the stock market doesn’t like.

The other big issue that started Tesla’s stock down was Musk’s acquisition of Twitter. The latter has founded and led several companies over the past twenty years, but his acquisition of Twitter last year had nothing to do with his management of SpaceX, for example. The aura that surrounds Musk – for his fans, a genius and a visionary – is one of the reasons why many people want a Tesla. Today, Musk has essentially become a professional troll on Twitter, posting provocations and blithely adopting certain right-wing positions from his powerful perch atop the social media giant.

The Morning Consult survey found that between October and November 2022, Tesla’s net popularity dropped 20 percentage points among Democrats and increased 4 points among Republicans. This could affect sales, as liberal readers tend to prefer to buy electric cars. Musk also had to sell billions of dollars worth of Tesla stock to finance the acquisition of the social media company, hurting the stock. Meanwhile, much to the chagrin of some of his staunchest supporters, his time on Twitter is cutting into his time for Tesla.

Many Tesla investors are worried for Musk to appoint a new Twitter boss — as he said he would — and step back from the social media company. “This is the moment of truth for Musk to do damage control now or the brutal pain will continue,” wrote analyst Daniel Ives, a longtime Tesla fan who has criticized Musk’s handling of the Twitter purchase. If Tesla shares continue to slide, the company’s valuation could be lower than that of social media company Meta, which owns the Facebook, WhatsApp and Instagram platforms.

With Tesla shares down 6.7% in US premarket trading on Friday, its valuation on the Meta looks set to drop, when at one point last year it was nearly three times more valuable than it was last year. If pre-market moves continue, Meta will have a market value of $330.3 billion. It could exceed Tesla’s 343 billion dollars at the time of writing these lines.

What do you think of the sudden drop in Tesla stock?

For you, is Tesla just a car manufacturer or a technology company?

Do you think Tesla stock can rebound and hit its highs in 2021?

A video shows that the Tesla’s Full Self-Driving mode is completely unable to handle snow, enough to make the California authorities who are trying to force Tesla out of its denominations smile.

California passed a law banning Tesla from calling the software in its cars Full Self-Driving because it was false advertising suggesting they were fully self-driving.

Tesla fined 2M in South Korea for false advertising, falsely promoting and exaggerating the range and charging speed of its electric cars

Even decades from now, you won’t get truly 100% autonomous vehicles. Cruise’s CEO believes that remote support will be around for a long time