In Brussels, an exhibition celebrates Her Most Gracious Majesty’s spy-loving racing cars. Beautiful and excellent mechanics await you.

In Brussels, an exhibition celebrates Her Most Gracious Majesty’s spy-loving racing cars. Beautiful and excellent mechanics await you.

From our correspondent Max Hellef (Brussels)

They are refined, curved, feline, technological. Wise before their time, one man might write, at a time when algorithms and artificial intelligence promise to transform humanity.

The fifth edition of the Vintage Fair once again presents at Luxexpo The Box fashion items, furniture and decorative pieces from a bygone era.

These are the cars that took part in the success story of James Bond, which began almost 60 years ago with the appearance of the legendary Aston Martin DB5 in “Goldfinger” by the British director Guy Hamilton. A fascinating mechanic that can be discovered among others until May 14 in Brussels, in Hall 1 of the Brussels Expo (Heysel).

The exhibition is called “Bond In Motion”, a title tailored like a tuxedo for Ian Fleming’s hero. It is derived from the four elements: fire, earth, water and air. In 6,000m², there are about fifty vehicles that participate in the glory of the British secret agent: cars, motorcycles, airplanes, helicopters, capsules, hovercraft… In real size or in the form of models, they represent many highlights of James Bond’s adventures.

“More than just an exhibition, ”Bond in Motion” offers an authentic experience that will excite all audiences, from the youngest to first-time enthusiasts, from film buffs to to technology enthusiasts and adventure seekers. , without forgetting everyone who wants to experience a family outing that affects all generations. Many other “non-automotive” items will also be on display and will certainly guarantee some great surprises”, the organizers announced. 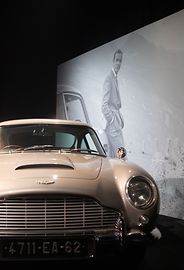 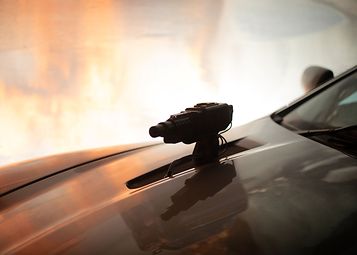 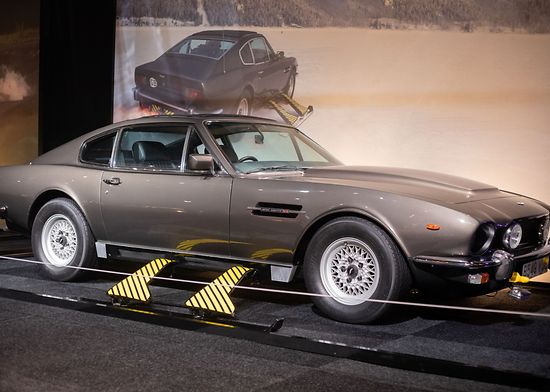 Click on a photo to open the photo gallery 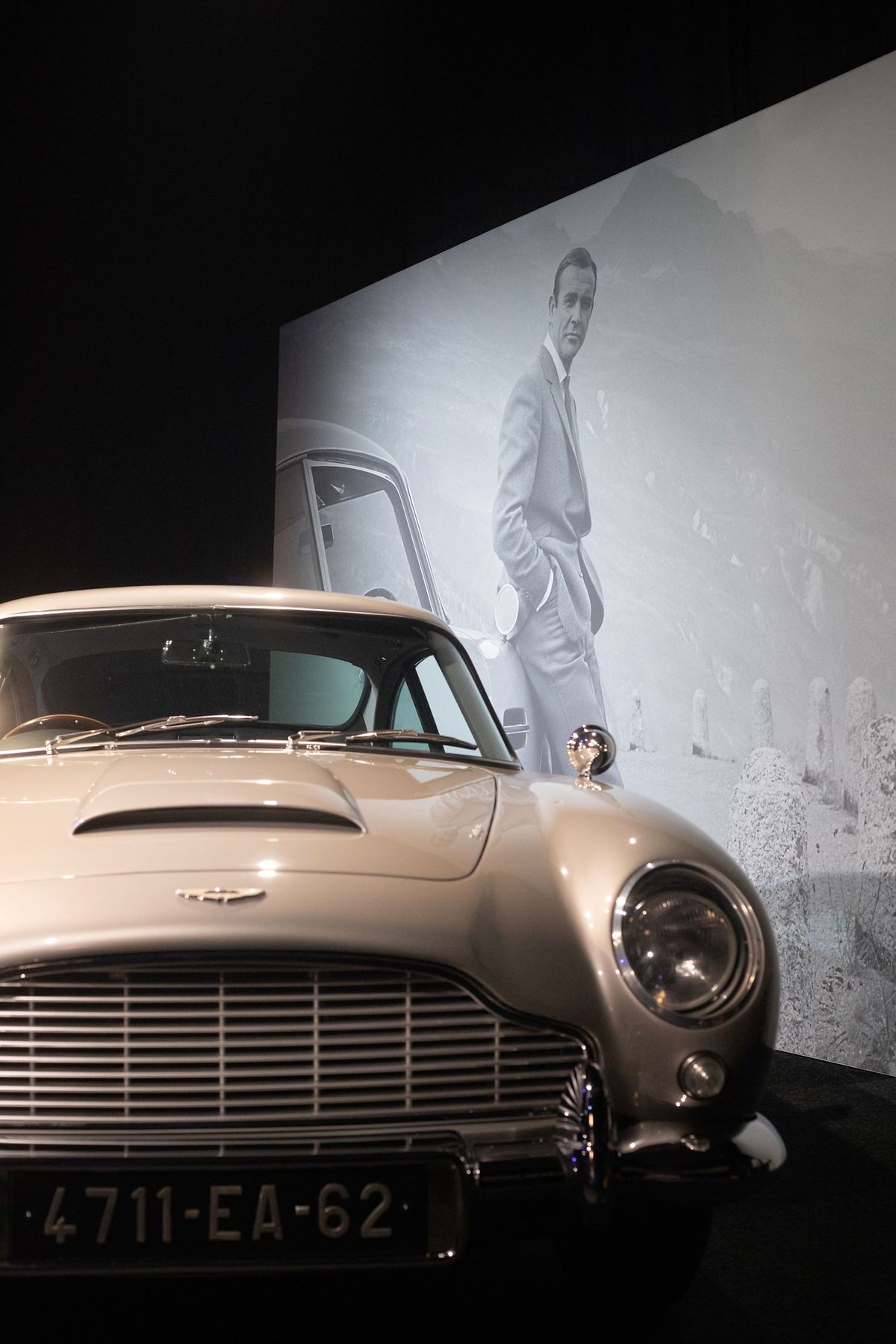 One of the many innovations from Q.

The Aston Martin DBS Vantage on skis for a scene in the Austrian Alps.

Every James Bond performer, from Sean Connery to Daniel Craig, has fronted one of these marvels to try to outwit their enemies before dispatching them. ad patres.

Taken under fire by bullets, spitting missiles, they rarely return intact to the garages of MI6 where bodybuilders have to put in overtime to repair the damage caused by the terrible son of the house. “Q” will tell you: Bond has no respect for mechanics.

Fortunately: not all of these cars were demolished for the needs of the cinema. The exhibition gives space to the models that allowed the directors of the twenty-five films stamped 007 to orchestrate special effects and stunts.

Many of these cars captured the imagination: the 1985 Aston Martin V8 from “Killing Is Not Playing” (The Living Daylights, 1987), the 1999 BMW Z8 from “The World Is Not Enough” (The World Is Not Enough , 1999) or the Aston Martin DB10 from “Spectre” (Spectre, 2015). Personally, we admit a slight weakness for the Lotus Esprit S1 from “The Spy Who Loved Me” (The Spy Who Loved Me, 1977), a mechanical masterpiece that plays with corrosion as it is transformed by the magic of cinema underneath of the sea It belongs to an era where the feeling of a science without limits was widely shared.

Bond has no respect for mechanics. Fortunately: not all of these cars were demolished for the needs of the cinema.

As for the mythical Aston Martin DB5, it has seen all colors. The bullet-riddled version that opens “To die can wait” can impress Brussels. A true combat vehicle, featuring standard Bondian gadgets from retractable machine guns to radar integrated into the dashboard.

In his book “Aston Martin, an art of living” (Chêne E/P/A editions, 2014) the historian Frédéric Brun tells how the novelist Ian Fleming first chose to give his hero a Bentley. The Aston Martin appeared later, with the novel “Moonraker” (Entourloupe dans l’azimuth) published in 1955. We will see it in the cinema with “Goldfinger” almost ten years later.

In the 50s and 60s, Aston Martin outshone the competition. In 1959, the brand notably won the 24 hours of Le Mans with Carroll Shelby. His models have the power of a racing car and the comfort of a limousine. David Brown, the boss of Aston Martin during the “Goldfinger” era, understands that its mechanical association with James Bond is synonymous with class and excellence.

From that moment on, they became 007’s trademark, one of the weapons that should allow him to kill, since death was written into his contract. In “Die Another Day”, the Aston Martin Vanquish was equipped with a V12. It is as desirable as it is powerful. He is “the best commercial agent of the brand”, comments Frédéric Brun in Le Figaro.

But back to our exposition. It is in the Beaulieu Motor Museum, in the county of Hampshire, which was launched in 2012 to celebrate the 50th anniversary of the first 007 released on the screen (“James Bond against Doctor No”).

The museum created after the war by Edward Douglas-Scott-Montagu, the third Baron Montagu de Beaulieu, has a series of cars that participated in the legendary victory. Let’s take the opportunity to say that it contains other marvels, including Graham Hill’s Lotus 49 R3 from 1967, as well as rockets on wheels intended to chase the speed record.

The exhibition was first shown at the London Film Museum where it attracted over nine million visitors. Then, he crossed the Atlantic to live at the Petersen Museum in Los Angeles until the end of summer 2022. Therefore, his arrival in Brussels is the first in Europe.

To bring it to life, the Brussels event agency Carbon-12011 signed a contract with the cinema production company EON Productions-London and The Ian Fleming Foundation. Metro Goldwyn Mayer (MGM), the city of Brussels and the British Embassy provided support.

The exhibition is intended to be immersive and of course “attractive”. He invites his guests to “The James” bar to enjoy a vodka martini cocktail “with a shaker, not a spoon” that the famous secret agent likes.

The bar “The James” – you can taste the vodka martini cocktail “with a shaker, not a spoon”.

Beautiful cars and James Bond Girls abound, all filled with alcohol vapor: the stereotypes that make up Ian Fleming’s universe stand the test of time. The “Bond in Motion” exhibition is welcomed by the City of Brussels – the Manneken-Pis dons 007’s white tuxedo for the occasion – at the very moment when the center of the capital closes a little more door to the car is became too intrusive. The traffic jams of the Petite Ceinture, the inner ring of Brussels, are enough to make James Bond’s Aston Martin completely neurasthenic.

Should we continue to celebrate cars when drastic reductions of greenhouse gases are at the heart of political agendas? The question itself is unheard of by those who point to the harms of climate change. For others, art, which gave way to shape and stimulate these mechanical anthologies, did not have to give way to the challenges and dictates of the time. But as always, when it comes to controversy, everyone is allowed to think.