The Australian koala will serve as the mascot for the new electric car from Chinese manufacturer Arcfox. A friendly looking animal that should carry the image of the Kaola family.

Yes, it’s Arcfox Kaola, because in Chinese the Australian marsupial’s name is pronounced like this (考拉) and not kOAla. Apart from some logos inside or outside the car, there is no imitation between the car and the animal, which is mainly there for the image of the friendly and kind animal, but also for its protection for its babies in his pocket. We have come a long way from the previous brand models, αS and αT, as the BAIC group’s brand communication revolves mainly around children.

For style, the design of the Arcfox Kaola could pass for a Volkswagen ID.3 station wagon or rather a minivan, where we added a big smile on the front. But if its design is not the main interest, its design is more original. Kaola is really asymmetrical. It has two classic hinged doors on the driver’s side, and a hinged door and sliding door on the passenger side. A motorized door with a sensor that allows it to be opened without hands.

The kings are behind

The interior is designed around the rear seats and the comfort of their occupants. The manufacturer also did not disclose an image of the dashboard. From the driver, we only know that through the big screen, he can monitor the children installed in the back through cameras, and of course take pictures to share the toddler’s smile live on social networks. But that’s not all, as the system is also able to recognize the child’s sleep and adjust ventilation and lighting, as well as audio. When the child falls asleep, the music is automatically transferred to the speakers integrated in the front head restraints. On the contrary, if the child is agitated, soothing music can be played while the lighting will also be adjusted. The screen features an avatar… a koala of course. The driver can also individually control the child safety in the two rear doors. 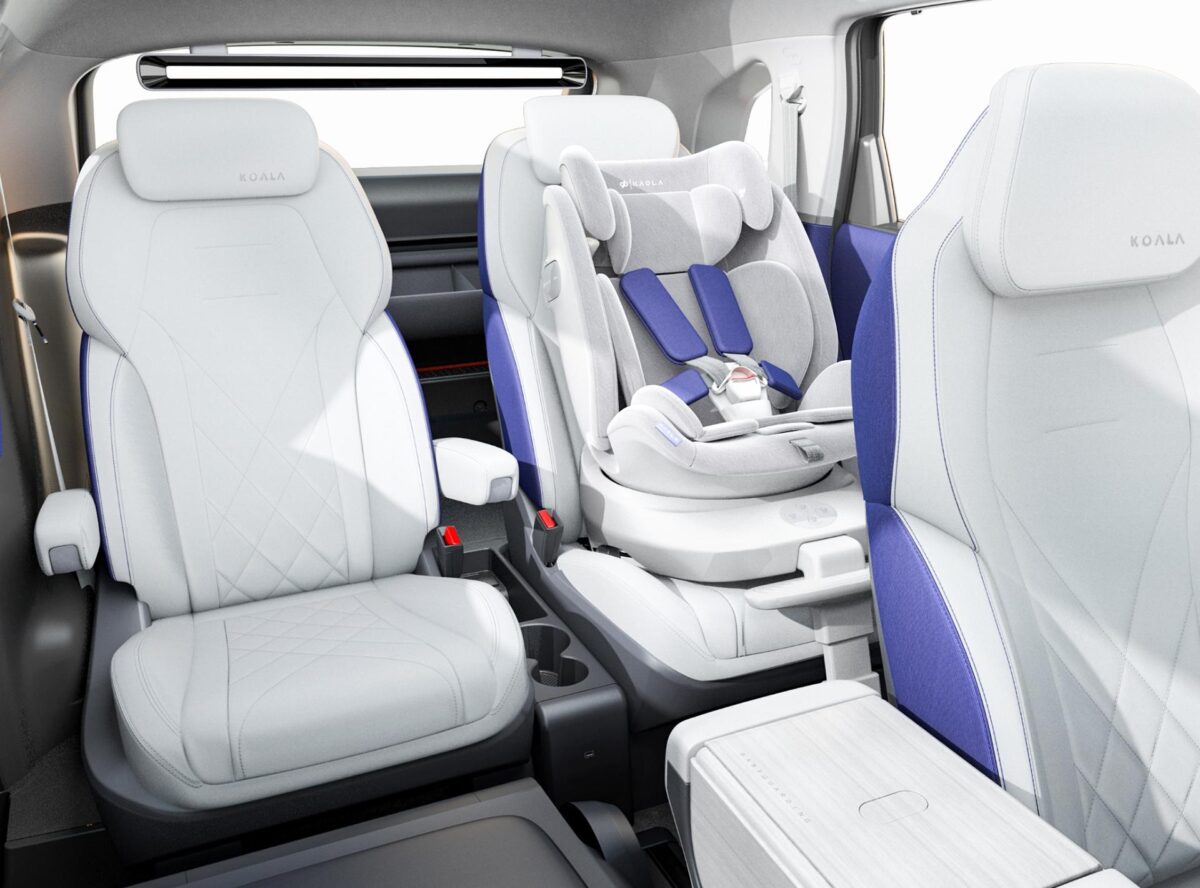 In the back seat, there are two individual seats with armrests. The vehicle is presented here with a new child seat mounted on a support that makes it rotate, to facilitate the installation of the baby without turning. With the added bonus of rotation linked to the opening and closing of the sliding side door.

This seat can adopt different positions depending on the child’s activity, for example by reclining to let him sleep. It is also equipped with various sensors, including a temperature one. The latter makes it possible in particular to detect activity at the diaper level to alert the mother, and adjust the operation of the air conditioning! In this case, we can use the changing table that opens on the back of the sliding central console. The front part contains a bottle storage space (for 4) that is heated or on the contrary cooled and connected.

For the occupant of the right seat, there is a fairly common function in China: a heated and ventilated seat with an extended position, here thanks to the front passenger seat that folds into a tablet, and equipped with a padded lower part. Arcfox specifies that the doors are equipped with blinds to maintain the privacy of the nursing mother…

Usually in China, air conditioning comes with filters that remove pollen, micro particles or even some viruses. But in the field of health, which is currently sensitive in the country, Arcfox adds a system for the elimination of viruses and germs using integrated ultraviolet lamps, covering 99% of the surfaces accessible by living Last specific point, the curtain airbag is specifically designed for a baby with a lower rear area with a larger volume.

Finally, the trunk has many fittings for storing everything needed for baby and mother.

No word on the other hand on the technical side, be it electronics and driving aids or mechanics for the engine, battery, autonomy or performance…