Season 9 is synonymous with a new era for Formula E: Gen3. The Mexico City E-Prix opens this 2023 campaign and Jake Dennis won at the Autódromo Hermanos Rodríguez.

That’s why Lucas di Grassi (Mahindra) took the very first Gen3 pole position, with Jake Dennis (Andretti) by his side on the front row. Behind them, Jake Hughes (McLaren) and André Lotterer (Andretti) will be the luxury arbiters of the front row duel. Our French on the grid Fenestras, Vergne and Nato are positioned respectively 8th, 11th and 20th!

The race now takes place over several laps, 36 here in Mexico! When the lights went out, the 22 single-seaters broke away from their positions, the beginning is given ! It was a good start for di Grassi in front of Dennis and Hugues, some cars were rubbing a bit at the back of the peloton. The yellow flags are deployed and will leave room for the entrance to Safety Vehicle, Robin Frijns (ABT-Cupra) was stopped after the chicane, he made contact with Norman Nato’s Nissan. And the French will stop in the pit lane.

Once our GEN3 cars made their race debut ⚡#MexicoCityEPrix pic.twitter.com/Jyh42SV6p1

Under neutralization, the Top 10 are as follows: di Grassi, Dennis, Hughes, Lotterer, Ticktum, Wehrlein, Fenestraz, Buemi, da Costa and Evans. At the end of lap 5 the Safety Car will be gone, di Grassi will be in charge of the restart of the race, the Brazilian will not surprise Jake Dennis.

Another yellow flag was shown, it was Sam Bird (Jaguar) who stopped sideways on the exit of the first corner. And this again Safety Vehicle (the Porsche Taycan) entering the track. Sam Bird was the victim of a mechanical breakdown from the start of the lap straight, it was the abandonment for the Jaguar driver.

And the whole peloton went through the pit lane behind the Safety Car at the start of the 9th lap, the marshals were on track with a crane to evacuate the Jaguar! The Safety Car will disappear at the end of the 9th lap, a quarter of the race has passed, but race management will add laps (to compensate for the Safety Car). In impulsion no problem for di Grassi at the head of the race, it goes without a hitch for the followers behind.

JEV would do the same on the next lap by taking three minutes, allowing him to move up to 11th place. At the head of the race, the change was that Dennis got the better of di Grassi. The Brazilian was harassed by Hughes’ McLaren and Lotterer’s Andretti. 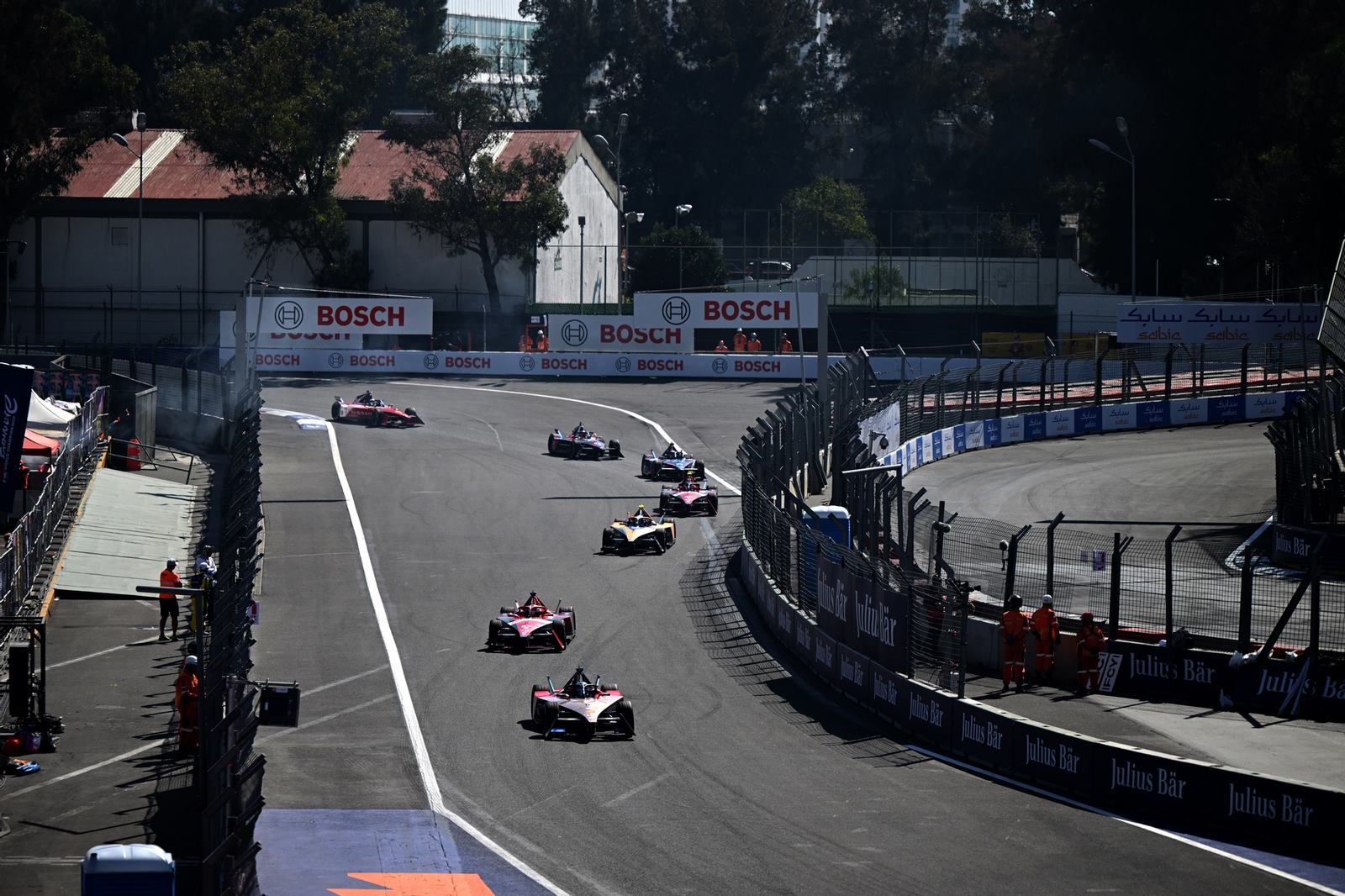 Dan Ticktum receives a Drive Through for excessive power consumption, the NIO driver will lose a lot. Dennis in the lead, taking the opportunity to trigger Attack Mode for 1 minute, he maintained the lead ahead of di Grassi and Hughes. The ranking in round 15 of the Top 10: Dennis, di Grassi, Hughes, Lotterer, Wehrlein, Fenestraz, Buemi, da Costa, Evans and Vergne. At Andretti’s, we passed orders to the leader Dennis asking him to use engine mode to save energy.

Edoardo Mortara (Maserati) entered TecPro on his own on re-acceleration at turn 1, it was again Safety Vehicle that enters the track. As with the second neutralization, the entire peloton went through the pit lane behind the Safety Car so that the marshals could evacuate the Maserati. The safety car disappeared at the end of lap 20. Dennis pulled away again and was not threatened by di Grassi.

Concerned with Avalanche Andretti, the engineers found a problem with André Lotterer’s car and were trying to solve it remotely. The ranking of the Top 10 in round 25: Dennis, di Grassi, Hughes, Wehrlein, Lotterer, Fenestras, da Costa, Buemi, Evans and Vergne. In the lead, leader Dennis has a 2.1 lead over Lucas di Grassi, the latter has a 0.7 cushion over Hughes and his McLaren. 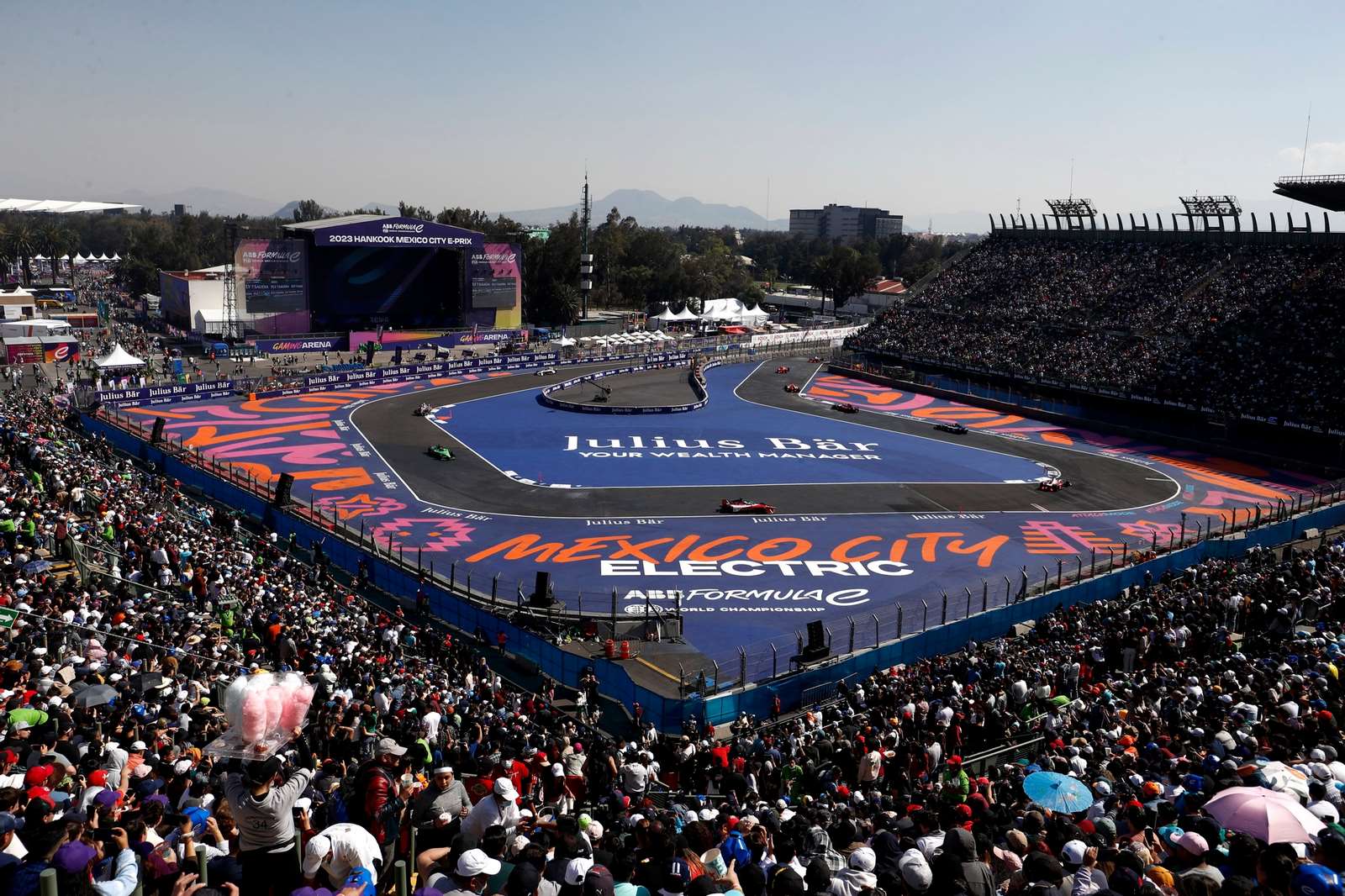 At the stadium, Wehrlein dived into Hughes’ McLaren which had just triggered its Attack Mode, and temporarily climbed onto the podium by hitting his brakes on di Grasi’s Mahindra, which had also triggered an attack again. AttackMode. In the lead of the race, Jake Dennis takes his last 3 minutes of Attack Mode, enough to allow him to escape a little more from the lead.

Ticktum, who had already been penalized for Drive Through at the start of the race, would again receive a penalty, 10 seconds added to his race time for having an off-track advantage. Pascal Wehrlein overtook Lucas di Grassi, we have two Porsche engines in the first two places. The ranking of the Top 10 in round 33: Dennis, Wehrlein, di Grassi, Hughes, Lotterer, Buemi, da Costa, Fenestraz, Vergne and Evans.

Jake Dennis is firmly in the lead, Pascal Wehrlein is also locked in, on the other hand Lucas di Grassi is under pressure against Hughes and Lotterer as the race management announces that there will be 5 added laps to compensate the neutralizations under SafetyCar. Di Grassi defends, Hughes looks for the opening, Lotterer waits and Buemi invites himself to the party! A yellow flag was announced at turn 8, it was René Rast (McLaren) who left the grass. Buemi broke the left vertical fin of his front wing.

With 2 laps to go in this extra distance, the Brazilian was closing all doors even more than Hughes threatened. Buemi shifts and signals behind Lotterer. The latter was also upset by the braking of the McLaren of Hughes, Jake Dennis (Andretti) started the last lap of the race, Pascal Wehrlein was alone, how about the fight with 4 pilots? Hughes stopped at di Grassi, Lotterer finally overtook the McLaren. 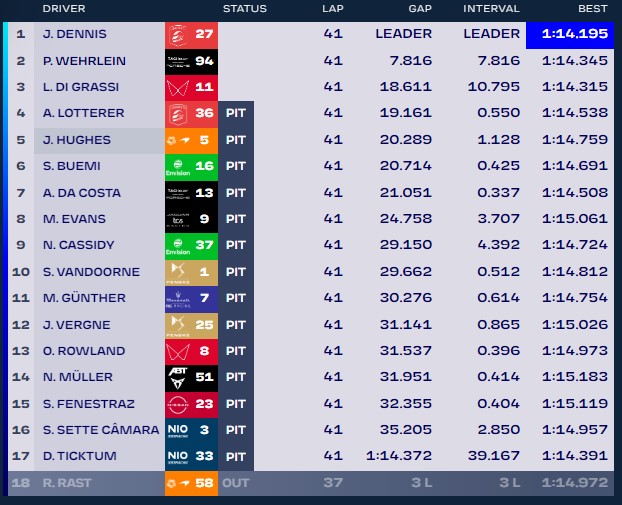