Having fallen in love with Romania during a volunteering mission, Marc Areny from Perpignan settled there a few years ago while working on solutions for retrofitting thermal cars and energy storage. This trailer, which he drove to the city of Odessa to supply electricity to a factory, office and residence, very well represents his background and his beliefs.

Many pioneers of electric mobility in France have known or heard of Marc Areny. Before dealing with Dacias, he converted a 1985 Porsche 944 bought second-hand for 2,500 euros in 2013. In France, he is known by retrofit specialists: ” For example, we gave elements to e-Néo for its Buggy realization, and to Retrofuture for its Peugeot 504 coupé conversion, and it looks good to me for the Triumph Spitfire too. We are also in touch with Lormauto, Design Solutions, LR Performance, etc. “.

Changing course in Romania: “ After a dozen individual projects, and without going into the series, we left the conversion of classic cars for a bit, to devote ourselves instead to Motorsport. I got a little tired of fighting for approvals. I don’t have this concern for cars converted for racing “. 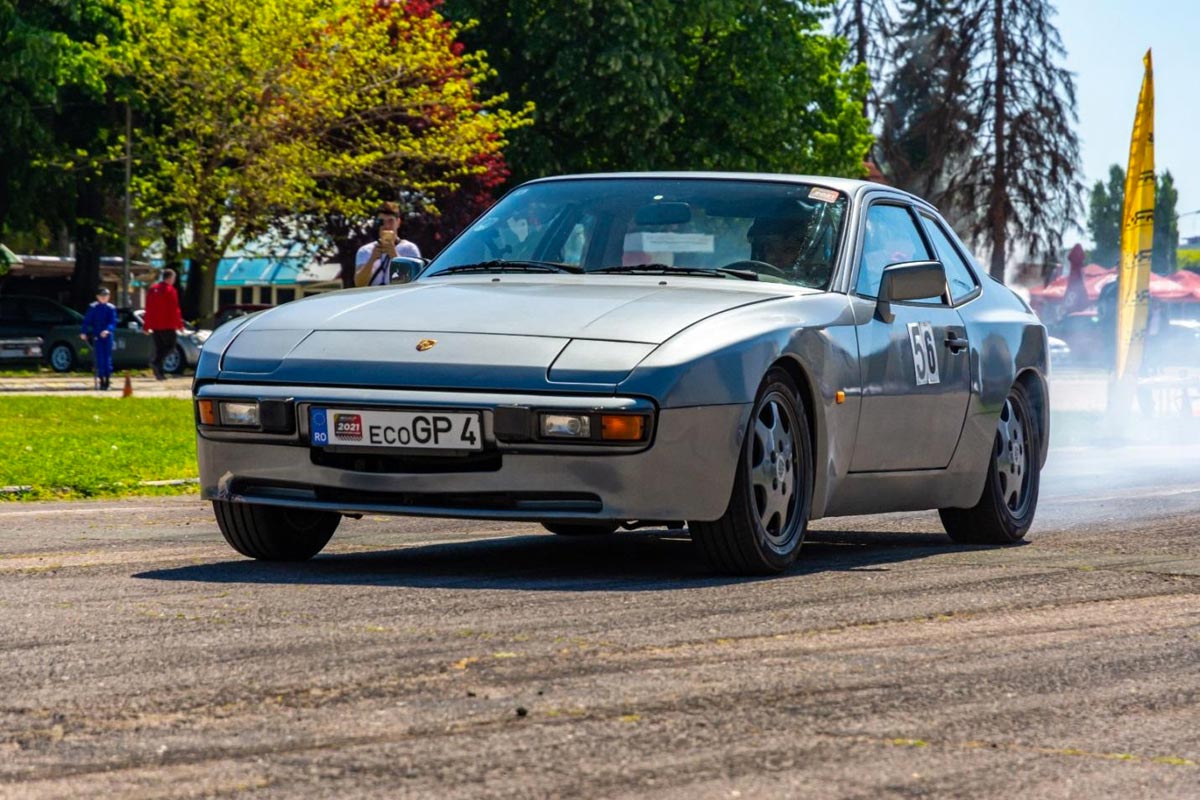 Now wanting to reserve himself for projects that lead more easily and quietly, he retrofits Land Rover Defenders and Porsches (911 and 964) for a partner: “ There we did most of the work, with the finishing done by our partner himself. “.

” In 2017, I was asked to build an electric buggy to test in the Aïcha des Gazelles rally. The way was given in particular by Jazmin Grace Grimaldi, the daughter of the Prince of Monaco, and Kiera Chaplin, the granddaughter of the legendary actor. I have thought before about the power supply of solar panels “reminisced Marc Areny.

” We didn’t continue the rally, but I stayed with my idea of ​​a photovoltaic trailer, with the size of 5 electric cars in the conditions of this event. He served at the Bucharest stage for the EcoGP. We took part in slalom “, he continued. 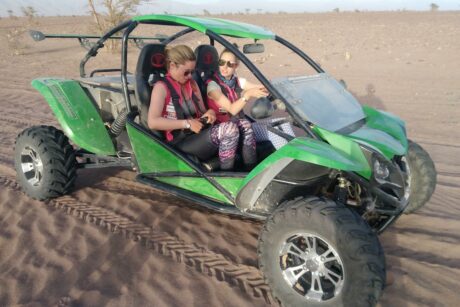 ” I know Sergey Velchev, the founding director of EcoFactor based in Odessa, Ukraine. He repaired Rafael de Mestre’s Tesla Model S after his accident. I called Sergey to tell him about our trailer. He was in Britain, but he flew out the next day to join me. We took him to Odessa together “, he explains.

” Where I am, in Pitesti, northwest of Bucharest, we are far from the Russian-Ukrainian conflict. The country is 300 km as the crow flies or 500 km by road. We could only see French soldiers passing by with equipment. On the other hand, the closer you are to the border, the more Romanians are affected, worried, because they have friends or family in Ukraine. said Marc Areny. 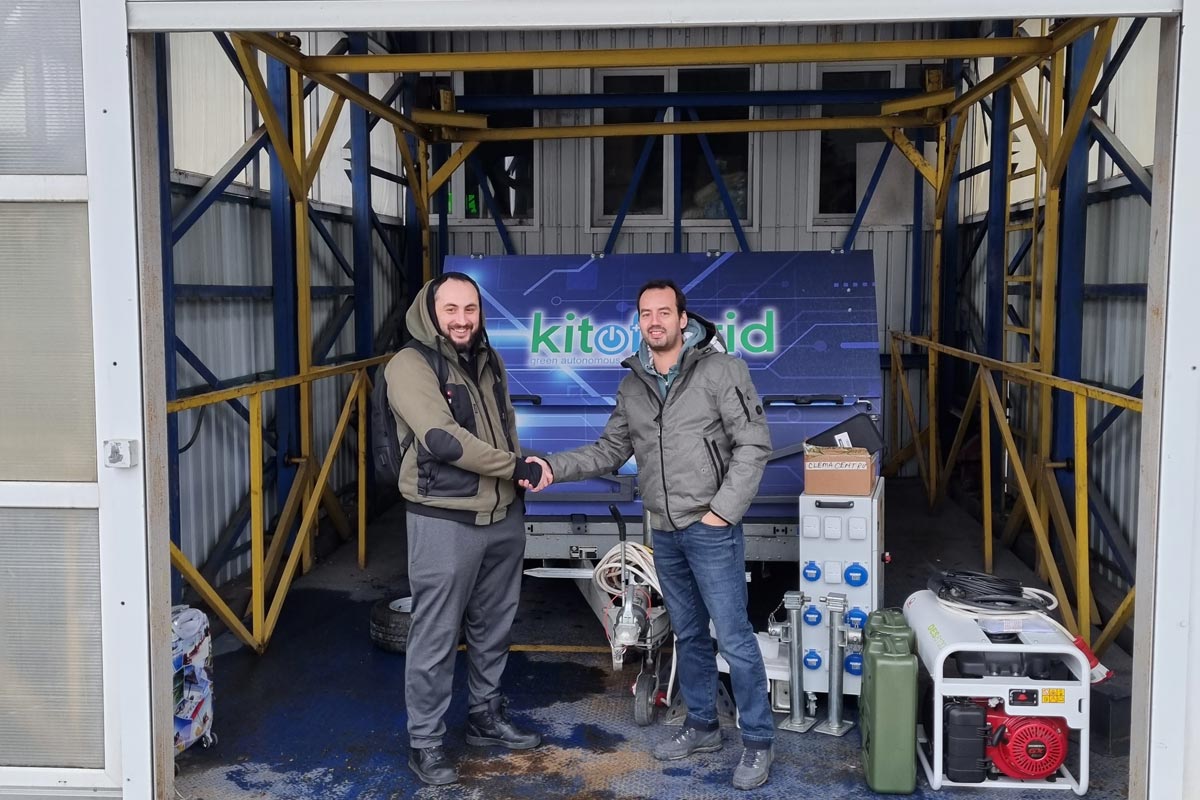 From L. to R. Sergey Velchev and Marc Areny

It is this concern that moves people, out of solidarity. And this word, unity », has long been in the vocabulary of our interviewee. He mobilized an important photovoltaic trailer to supply electricity to housing and business areas in Odessa, a city of approximately one million inhabitants: ” Sergey warned me that it was not without risk. A bomb could fall here, I know, and I assume. This is the demonstrator of a solution that we intend to rent and sell. I leave it available at all times required. After all, he is very concrete experience. “.

Marc Areny will undoubtedly remember his arrival there: “There was no light. At night, we hear the sounds of generators everywhere. The fuel is zero-rated to facilitate its use”.

The mobile unit was installed in a large workshop, near a charging station for electric vehicles, and attached to an apartment bar: ” Solar panels are not used. The trailer is mainly used as a buffer, and to stabilize the current. It is recharged when the network is present and the demand for electricity is not too high. For example in the early morning “.

In case of interruption? ” When there is no network, the trailer supplies the electricity. And when the batteries are discharged, they are powered by an external thermal generator. Before Christmas, the national electricity grid was only a third of the time “.

Away, Marc Areny gives us information on the real-time usage of his solution: ” I have a Starlink connection in the system. Alarm graphs show me network losses. There, on this Thursday, January 12, 2023 at 11:10 am, the charge level is 54%, and the trailer provides a power of 20 kW. Not only for lighting, but also for workshop tools. For heating, Ukrainians try to manage others. In the workshop, for example, a wood-burning stove with ventilation was installed. “.

The energy capacity of the photovoltaic trailer is 200 kWh: ” For this, we got a pack and a half of lithium-ion from a damaged Tesla Model S. We reconfigured the assembly for 48 V. It can provide a power of 50 kW three phases. For this, we have a 10 kVA Victron inverter for each of the 3 battery phases, and a 25 kVA Fronius for the additional panels. “.

Additional photovoltaic panels? Basically, it’s the 9 we see in the trailer: 3 in the middle, and 3 others on each side, mounted on sliding side drawers? ” Yes. It is possible to add 60 additional 400 W panels, which will be deployed around, for example to power an event. Thus, we have a true micro-power plant. We regularly receive requests that we do not expect “. 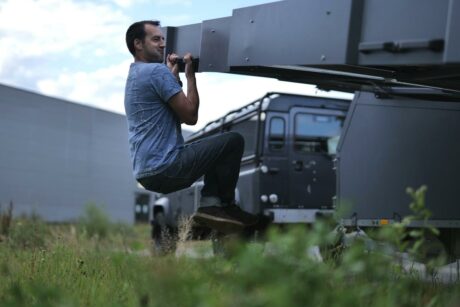 To bring an ecological touch to an event? ” Exactly, no, not necessarily. It is more for practical reasons or imperatives. So for shooting feature films, where there are significant barriers to external noise. Also, in some locations, transporting fuel by tanker for large generators can be problematic. It is quite the same for concerts given in the Danube delta and by the sea. “.

” We also have demand in France for similar projects. This is why we live in Lyon-Villeurbanne, in the Bel Air Industrie area where there are already several startups. Under the Kitoffgrif brand, we develop solutions for energy storage. I will also do a bit of Motorsport, but no classic retrofit », Marc Areny taught us.

Another Perpignan pioneer of electromobility, Robert Morandeira is preparing a new event in his city for the Pentecost weekend, at the end of next May. In relation to the Automobile Club du Roussillon, Free wheel will tell the story of mobility for the second year in a row. Bob66 will take care of the car part of the future, which will produce hydrogen in particular, autonomous vehicles, and retrofitting.

A chance to show off the photovoltaic trailer? ” I don’t think so, because he will probably still be useful in Odessa. On the other hand, I am planning a prototype circuit that has never been built, or our Volkswagen Golf 6 has been converted for hill climbing. This Golf 6 should help a 15-year-old continue his competitive path. He distinguished himself in Formula 4 at the Paul-Ricard circuit and made a splash at the Winfield driving school “.

” Among other projects, we will support a manufacturer in retrofitting 2 vehicles. The first is a classic model, and the second is a boosted engine. For the car, W-Autosport should be there too. This workshop is known for building the Fiat Multipla 1,000 hp for Youtubers from the Vilebrequin channel. Turbo magazine, from the M6, should have a report on it next September “, revealed Marc Areny.

” We plan to release a Beltoise BT01-style prototype this summer. We want to show that with upcycling we can achieve high performance in a relatively small way. In particular, we will reuse parts from Tesla. When the car is ready, we will bring it back to France “, he concluded

Automobile Propre would like to thank Marc Areny for his availability.

Also read
Which electric cars can be towed?

When we started thinking about Marc Areny’s interview, we didn’t think of this angle focused on Ukraine. He forced himself into the conversation. Initially as a French opinion on the Romanian understanding of the conflict with Russia. Sometimes in a phone or live interview, all the richness of a topic comes out. This is the case here.

This momentum that Marc Areny has taken is remarkable. This shows that it is possible to come up with new solutions that can also be used by unification in real situations.

However, this conflict in Ukraine is very disturbing. This is no less than the climate emergency that should mobilize every country in the world. But so are the health and lives of citizens. Peace should be clear now. There is no time for war. Many top minds need to be retrofitted. And there it is not about electric motorization.