2018 was the year Lamborghini introduced the Urus… or rather, the year the Lamborghini Urus made a big splash. And not only because the Sant’Agata Bolognese SUV has never suffered from any shame or false modesty. But also because it boldly claimed its own place in the market while creating a new segment: the super-SUVs.

A segment where it had a monopoly for some time, but where it now has to face competition from the Aston Martin DBX and the Ferrari Pureblood. If it were up to us, we’d also add the Porsche Cayenne Coupe Turbo GT to that list, but as a Lamborghini spokesperson correctly pointed out to us, “Porsche makes sports cars, we make super sports cars »
To meet this competition with open arms in the ring, the Lamborghini Urus has undergone a small change. The power of the 4-liter twin-turbo V8 is increased by 16 hp, from 650 to 666 hp, a “devilish” figure that reaches 6000 rpm. The maximum torque remained at 850 Nm between 2300 and 4500 rpm. An optimized engine, therefore, that takes place under the hood of two models: the Urus S and the Urus Performante.

The Urus S is the more civilized sibling of the family. A bit more reserved in showing off its capabilities, but slightly slower than the Urus Performante, which shows off its muscles shamelessly. Ultimately, that translates to a 0-100km/h sprint in 3.3s and a top speed of 306km/h. The Lamborghini Urus S sticks, for its part, to 3.5 s and 305 km / h, respectively.
To give you an idea of ​​the level of performance this represents, the Huracan Tecnica reaches 100 km/h in 3.2 s and peaks at 325 km/h. But the family is not in the back seat.

The Lamborghini Urus Performante is bathed in carbon. Starting with the hood, which is painted in the usual body color, but slightly bare as an option. The same applies to the carbon roof for an additional fee, which is highly recommended for those who want to openly display this light and expensive material.
In addition, the new front bumper with splitter and a lower rear bumper with diffuser are made of “the same metal”, not to mention the rear spoiler, a nod to the Aventador SVJ, which provides 38% more support in the back.

Finally, the carbon accent pieces are unusual, like the fender extensions, which justify their presence by the 16 mm wider track and the impressive wheels: 22-inch rims as standard with titanium nipples , fitted with 285/40 front and 325/35 rear tires.
Surprisingly, the options list not only mentions 23-inch rims, but also Pirelli P Zero Trofeo R tires. Which means that the Urus Performante is the first SUV that can be equipped with semi-slicks specially developed for this high weight. They promise better performance not only on dry roads and at high temperatures, but also on wet roads at lower temperatures.

The question we have to answer with the introduction of this winter is: what is the main difference between the Lamborghini Urus S and the Urus Performante? A question we cannot answer right away, because in its Strada driving mode, the Performante version also shows its most comfortable side.
Perfect for queuing during the morning rush hour in and around Copenhagen. We keep it as civilized as possible, to prevent the Danish capital from suddenly waking up. That’s no small feat, as the sound coming from the titanium Akrapovic exhaust is quite bold, even from a distance.

We switch to Sport mode. The effect of this intervention is felt immediately. The twin-turbo V8 engine responds more quickly to the throttle, the gearbox shifts more quickly from gear to gear, and the rear-wheel steering makes the rear more nimble at low speeds. This results in more direct steering behavior, which is further accentuated by active torque distribution in the rear differential.
To achieve a more direct connection with the car, Lamborghini chose a sportier suspension setting for the Performante: a steel suspension with new, stiffer springs, specific dampers and active stabilizers, which minimize body movement. .

This last point, moreover, is not an easy task. The Performante’s modified suspension can lower the Lamborghnini Urus by 20 mm, and the abundant use of carbon fiber helps reduce its weight by 47 kg, but this does not change the fact that this SUV remains a behemoth, especially that for a car with a very sporty. habit, tall legs and weighs 2150 kg. It is known that with its weight / power ratio of 3.3 kg / hp, it is also the best in its class (admittedly reduced), not changing much.

However, it’s still as efficient as ever, as evidenced by the activation of Corsa mode, which stiffens the suspension and deploys electrically operated stabilizers all the way, absorbing and neutralizing body motion. in a spectacular way. A mode that also optimizes the sound of the engine in a sporty way, which is certainly not important in a Lamborghini.
And then there is Rally mode, where the ESP action is weakened and most of the power is sent back to the right side of the car. The rear, in fact, makes the impressive Urus Performante particularly playful. Not in Rally mode with some kind of magic feature that makes the Lancia Delta HF Integrale the behemoth, but oversteer is encouraged to such an extent that it’s child’s play to make this Lamborghini a very entertaining drift. 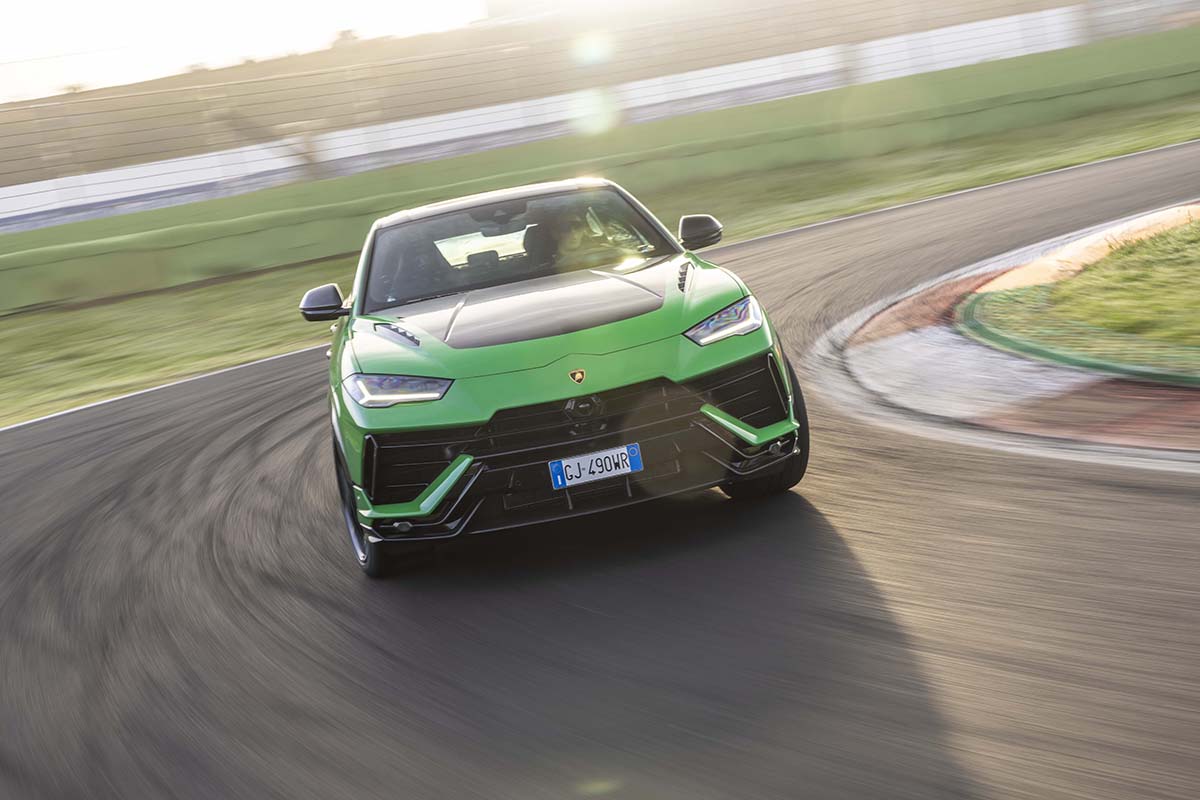 And yes, even though we’re the type of drivers who prefer to cross with our bottoms a few centimeters from the tarmac, we have absolutely no problem admitting that the Lamborghini Urus Performante has good genes. And we’re not referring to the fact that Lamborghini was originally a tractor manufacturer. Definitely not !