The initiative is unprecedented. It says a lot about South Korea’s focus – and what it means – to continue the legacy of the PyeongChang 2018 Winter Games.

Opened in May 2019 at the request of the country’s authorities and Gangwon province, the PyeongChang Heritage Foundation last year invited nearly a hundred young African athletes to discover and learn about winter sports. . With the ambition to offer them the opportunity to participate in the 2024 Gangwon Youth Winter Games (January 19 to February 1).

The President of the Tunisian Ice Hockey Association, Ihab Ayed accompanied his country’s delegation throughout the adventure. With the opening of the Winter YOG 2024 in Gangwon just a year away, he said FrankGames an experience that could change the Olympic future of many African countries, where the Winter Games have always been considered a distant and inaccessible event.

FrancsJeux: What is the starting point of this initiative to identify young African talents for the 2024 Winter Youth Games in Gangwon?

Ihab Ayed : The idea came from South Korea. This is part of the legacy of the PyeongChang Winter Games in 2018. The PyeongChang Foundation has entered into a partnership agreement with the Association of African National Olympic Committees (ANOCA). ANOCA then launched an appeal to all the National Olympic Committees of the continent, to identify young people with an interest in winter sports or a minimum training. The Tunisian NOC contacted me, in my capacity as President of the National Ice Hockey Association, the only entity in the country dedicated to winter sports. I alerted my acquaintances, I used social networks. I have identified eight Tunisian children, born between 2006 and 2009, to respond to South Korea’s request.

What follow-up was given to the surgery?

It is very concrete and perfectly organized. The Foundation invited us to a two-week summer course in PyeongChang, from May 28 to June 13, 2022. It brought together more than 80 young Africans, from many countries, such as Algeria, Ethiopia, Sudan, Lesotho, Sierra Leone and South Africa. A very intensive course, where the South Koreans subject all young people to physical tests, at the beginning and end of their stay, to assess progress. They offered us a summer version of a winter sports discovery program – bobsleigh, downhill skiing, sledding, cross-country skiing on wheels… The sessions are sometimes very specific, led by the national coaches of the South Korean federations which is relevant. The evenings are devoted to more cultural activities, a discovery of South Korea, doping education sessions, competition management.

How is the program funded?

South Korea covered all costs. For African NOCs, everything is completely free, including travel and transfers. We were even reimbursed for PCR tests. We live in the PyeongChang 2018 Games athletes’ village.

Was the experiment continued in colder conditions, in snow and ice?

In September, the Koreans informed ANOCA of a list of about forty young people selected to continue the venture. For Tunisia, we went from eight trainees to four: a woman and a man in bobsleigh, a woman in skeleton and a man in alpine skiing. This strict selection was invited to a second regrouping of approximately ten days in PyeongChang, at the end of last December. Countries that did not attend the first gathering were also invited, such as Comoros, Uganda, Cape Verde and eSwatini (formerly Swaziland). This time, the program is intended to be more specific, with each of the youngsters having to focus on their single sport, with supervision still provided by the coaches of the South Korean Olympic team. 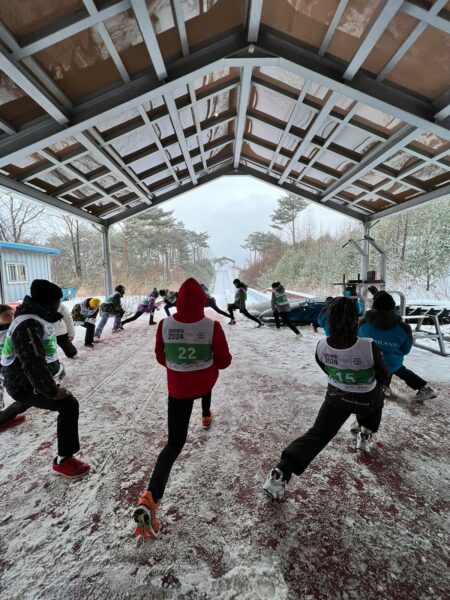 Will all the young Africans selected take part in next year’s Winter YOG in Gangwon?

Not needed. They will, like young athletes in other parts of the world, have to win at their chosen one. It will go through participation in international competitions, to get points and win quotas. South Korea does not decide on participation in YOG 2024, it is the responsibility of international federations. But his initiative gives an opportunity to countries without snow and to athletes who until now are far from winter sports. But this is also the raison d’être of the Youth Games.

Is Tunisia’s participation in the YOG 2024 in Gangwon realistic now?

Of course. But, since the country currently does not have any national winter sports federation, the road to Gangwon 2024 goes through an affiliation of the Tunisian Olympic Committee with international bodies, the FIS for alpine skiing, the IBSF for bobsleigh and the skeleton. The process should be initiated and validated as soon as possible.

What role did ANOCA play in the South Korean initiative?

A driving role. Mustapha Berraf, the president of ANOCA, discussed the project and its conditions with the PyeongChang Foundation, then signed the cooperation agreement. The body then stimulates the NOCs to respond to the invitation. A representative of the association, the South African Ezera Tshabangu, was present throughout the course. ANOCA ensured the real follow-up and promotion of the project, with the desire to see as many young Africans as possible at the YOG 2024.