Made official last summer, the DualSense Edge is the very first professional controller designed and sold by Sony. It’s exclusive to the PlayStation 5, and comes as an obvious – and overdue – answer to Microsoft’s Xbox Elite Series 2.

Testing was performed on a controller provided by PlayStation.

It’s clear: the DualSense Edge looks like the DualSense that came with the PS5. However, it is heavier, with 336 grams on the scales against 234 grams for its younger sister.

Aesthetically, however, there are some minor differences. First, the branches where one touches the pads are no longer bevelled, but slightly rounded at their ends. Handling, in our opinion, is more pleasant in the long run. Then, the L2 and R2 triggers now benefit from a non-slip textured look.

Also, and this is the prerogative of “Pro” controllers, the DualSense Edge has some additional buttons that will allow you to shape your gaming experience in a granular way. Let’s start with the back of the controller. There’s a small slider on either side of the back that lets you adjust the depth of travel of the R2 and L2 triggers. Obviously, you can choose between a deep race, especially more pleasant for car games, or a very short race, which is perfect for speeding up the rate of fire in FPS.

Still behind, two additional spaces are presented to accommodate, as desired, two paddles or two additional buttons. Nothing but very ordinary for a professional controller… except that Sony limited it to one palette per side. We’ve gotten more used to finding four extra buttons, or even six in the case of the most recent Razer Wolverine V2 Pro.

A final button catches our attention on the back side. baptized” release », it allows you to remove the front shell of the controller to access the (symmetrical) stick which, it is original, is removable.

To do what? Just to avoid having to replace the entire controller in case of a malfunction. It is actually possible to exchange these modules for €24.99 in the official PlayStation store. A good point for the durability of the controller, especially since the process is childlike. Once the front plate is removed, simply lift the small lever that will release the block. All that’s left is to pull it towards you to remove it from the set. 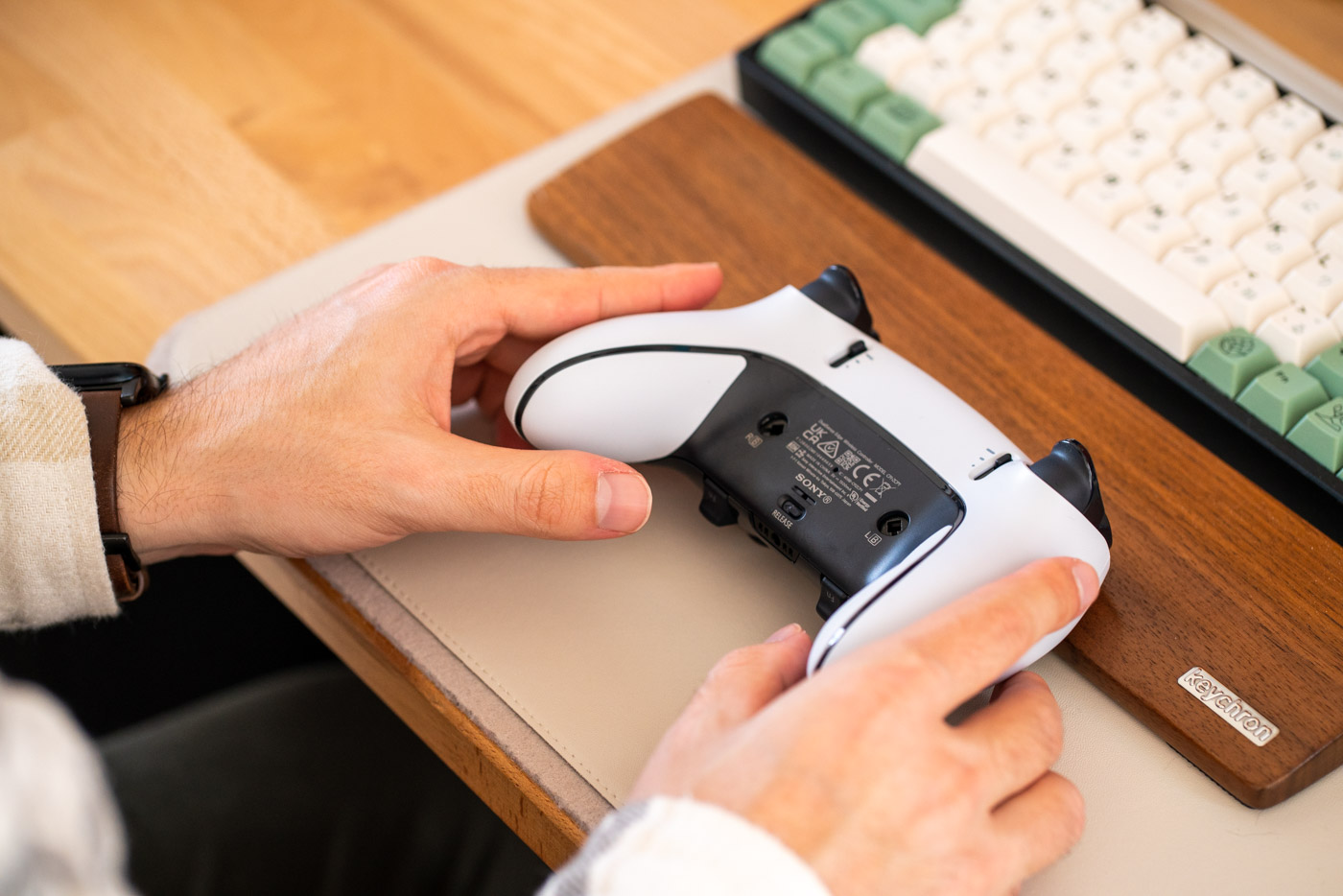 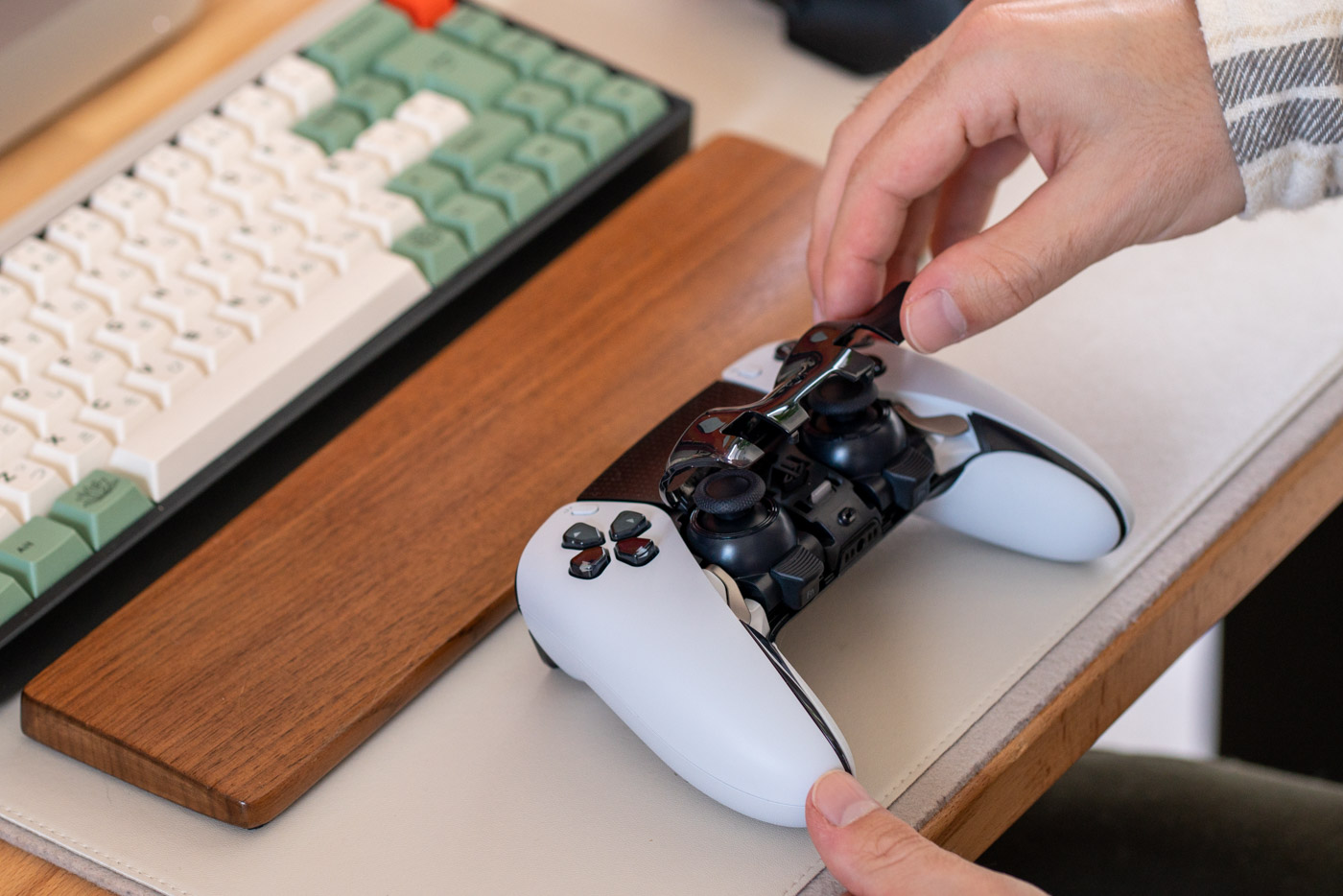 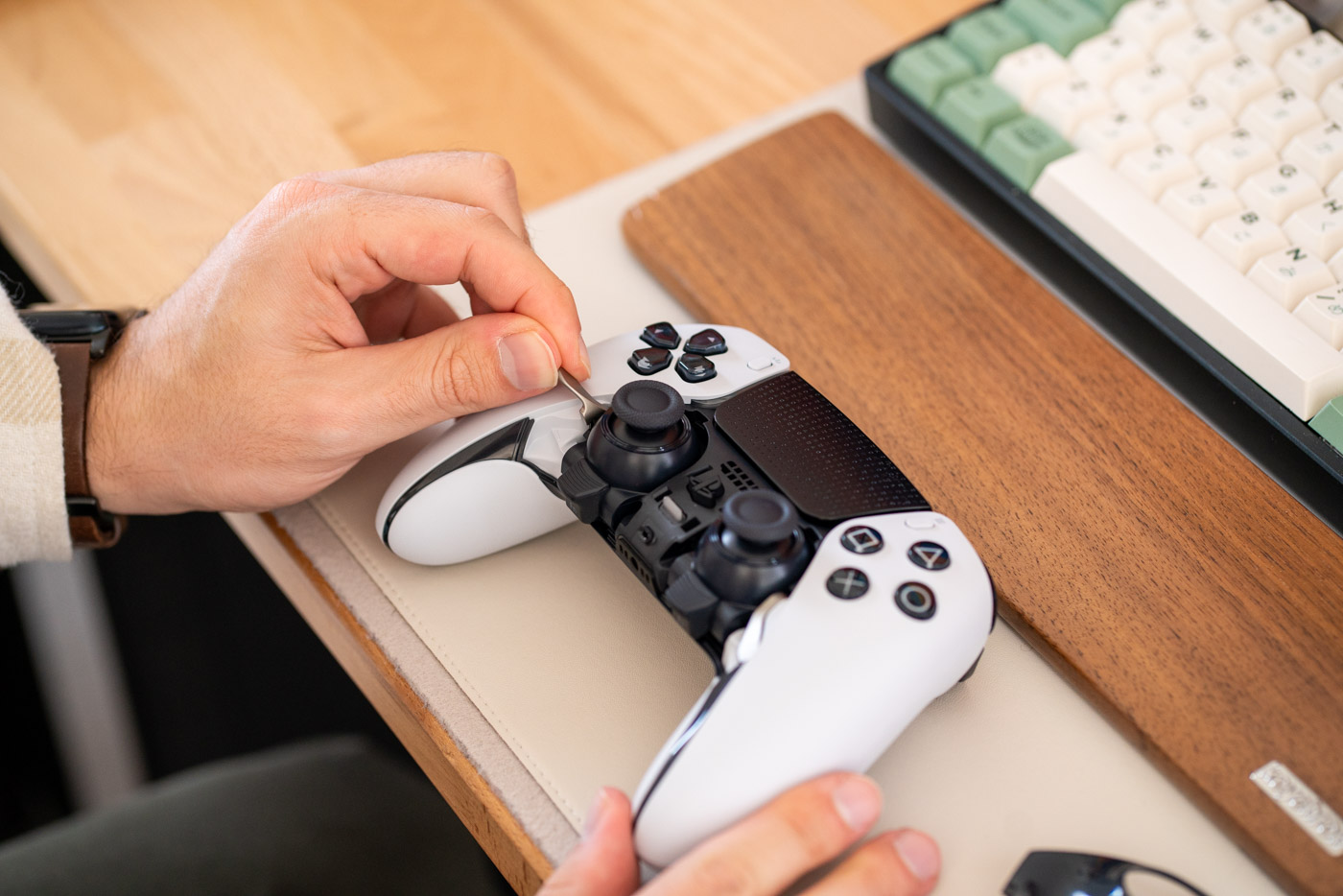 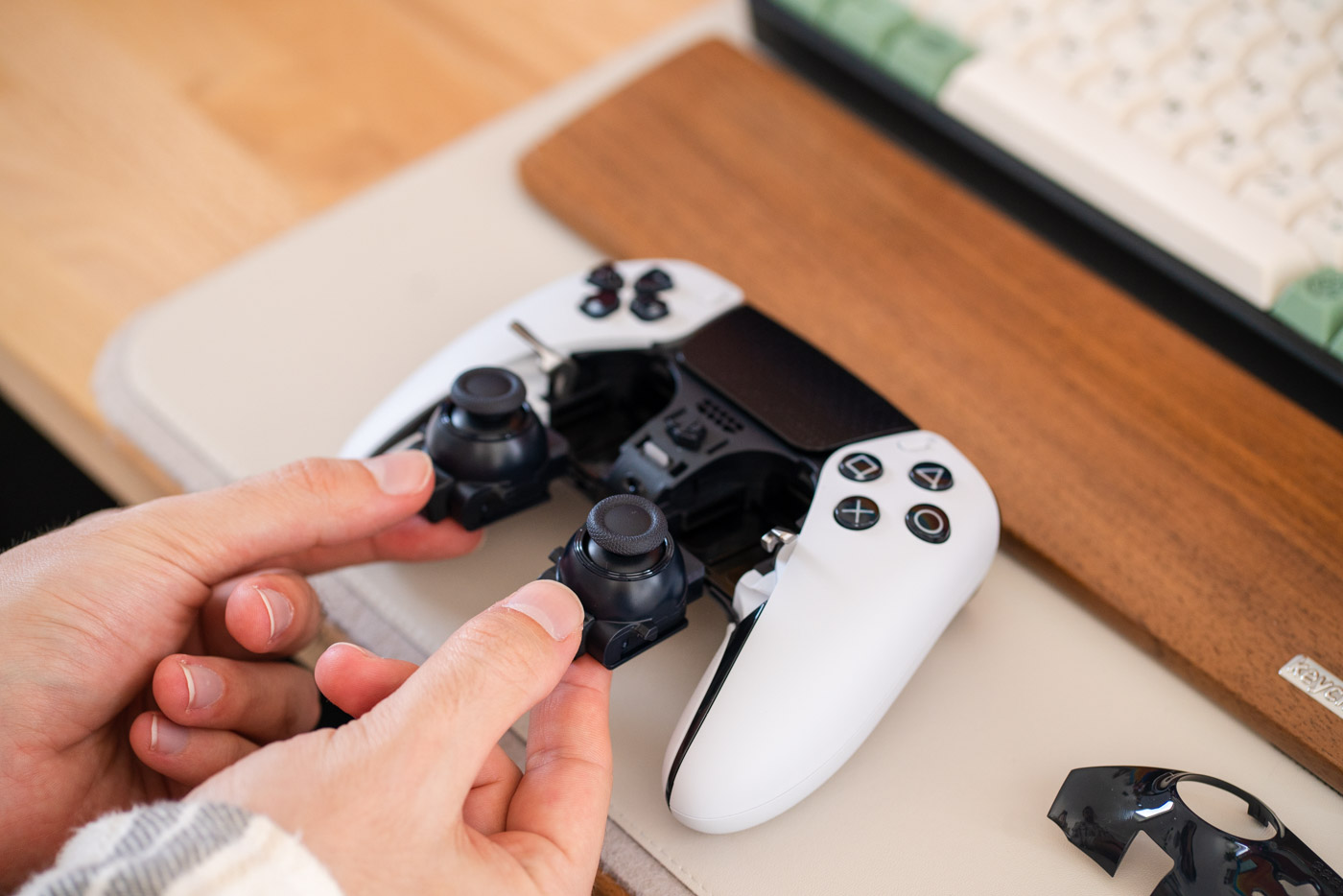 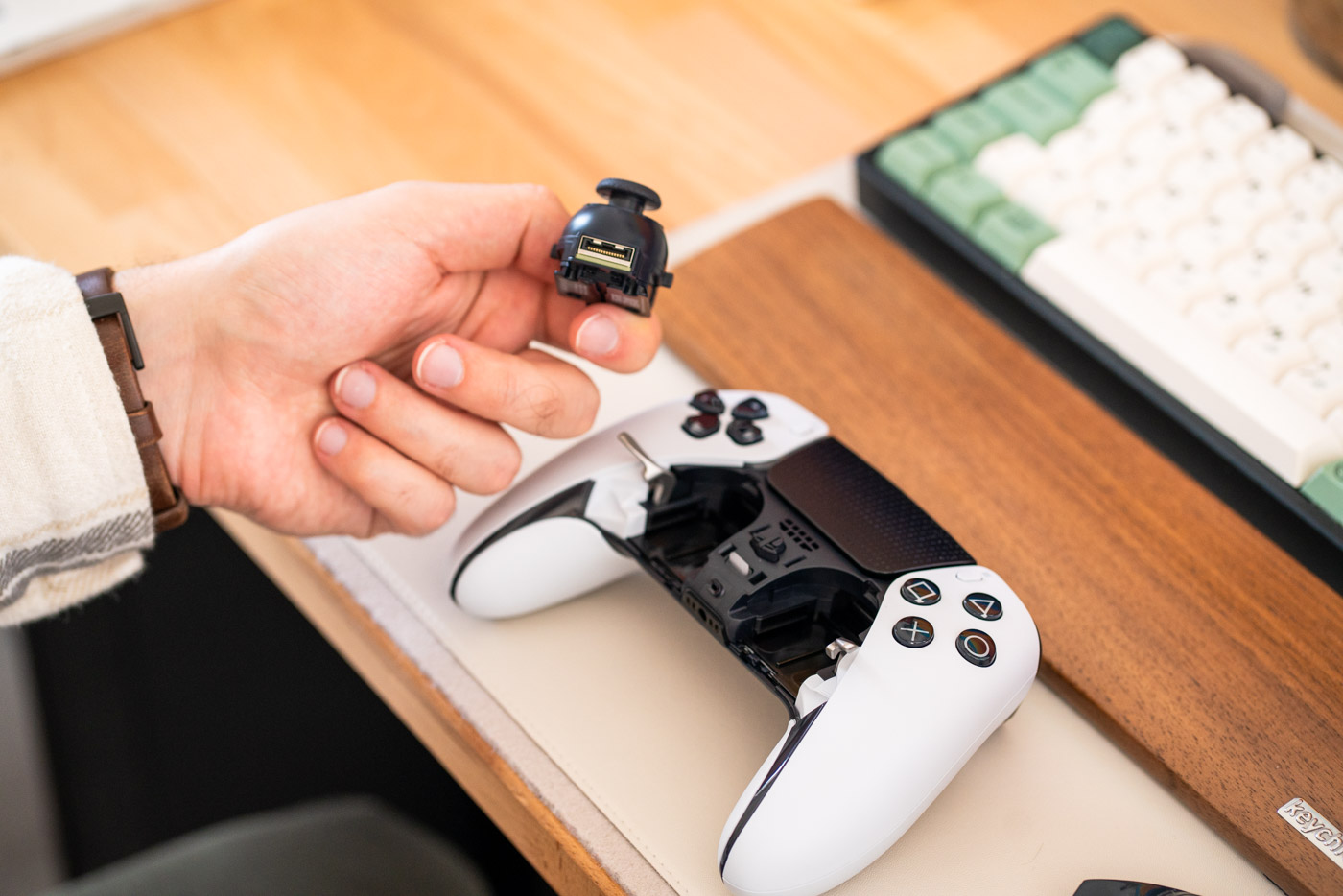 For that matter, we’d also appreciate the possibility of opting for an asymmetrical layout, but that would be tantamount to Sony saying it’s been on the wrong track when it comes to ergonomics for more than 20 years. We will do without it… But maybe not the most elite competitive players who, usually, have a fear of this kind of provision.

Another feature of the so-called “professional” controllers, the DualSense Edge has four additional stick caps. All are domed, but two are taller than usual to suit those who want better sensitivity control.

We still need to address the case of the last two additional buttons of the DualSense Edge. They are definitely located in the analog sticks module and have the name Fn – for function. Despite a rather clever placement, accessible with a thumb tension, they are to say the least useless… for nothing in the game. We would really only use them to quickly switch from one game profile to another, but it’s impossible map a particular key here.

You know this if you read our Razer Wolverine V2 Pro test last week: PS5 controllers made by third-party manufacturers should ignore certain DualSense features. That means HD haptic feedback and adaptive triggers. Quite logically, the DualSense Edge does not suffer from these sacrifices and the particularities of the excellent PS5 controller remain here.

In short, if it’s hard to recommend the Razer controller to gamers who just want a customizable and versatile controller, especially for single player gaming, the Edge is perfect. It is neither more nor less than a classic DualSense, which will offer a full range of customizations and additional features to suit all gaming styles.

Obviously, if you have the budget and want to treat yourself to a premium controller to enjoy all your PlayStation 5 games, whether single or multiplayer, the DualSense Edge is undoubtedly the best choice. But the controller, let’s remember the price of almost four classic DualSense sold, is it really worth the cost?

DualSense Edge: what is it for?

The real interest of a “pro” controller is debatable. Would you be more gifted at the guitar if you bought Jimi Hendrix’s Stratocaster? Can you run as fast as Usain Bolt wearing overpriced Pumas? The answer is no. On the other hand, these beautiful things make you happy to play guitar and devour miles of tracks. Similarly, DualSense Edge makes you want to play PS5.

For me, the reason is quite simple: I love palettes. In particular the “button” model which I think is very discreet and perfectly placed. In my favorite FPS, I set the sprint key (pressing the left stick) to the left back paddle and the slide button (O) to the right paddle. So I avoid using traditional crosses, circles, squares, triangles on my controller and therefore I am more responsive in the game. Does it really change the game? I’m too familiar with online gaming to answer this question properly. However, is it more comfortable? A thousand times yes.

This is the whole point of the DualSense Edge. As soon as you plug it into your console, the PlayStation 5 OS gives us a tour of the owner and invites us to create a profile. The wide variety of options available will make you dizzy. Not only can you virtually remap all the buttons on your controller (to the point of putting a cross button on the R1 trigger for example), but also fine-tune the sensitivity curve of the triggers and analog sticks. You can opt for something very nervous, without any inertia for fighting games or, on the contrary, a very progressive method that is perfect – in my opinion – for shooting games.

For the latter, we can also switch quickly between several profiles using the Fn keys discussed above. For ranged combat, we would prefer a lower sensitivity to aim correctly. For close combat, response is prioritized. Just press Fn and press square, circle, cross or triangle to instantly load the profile. Imaginative, and dizzyingly profound. 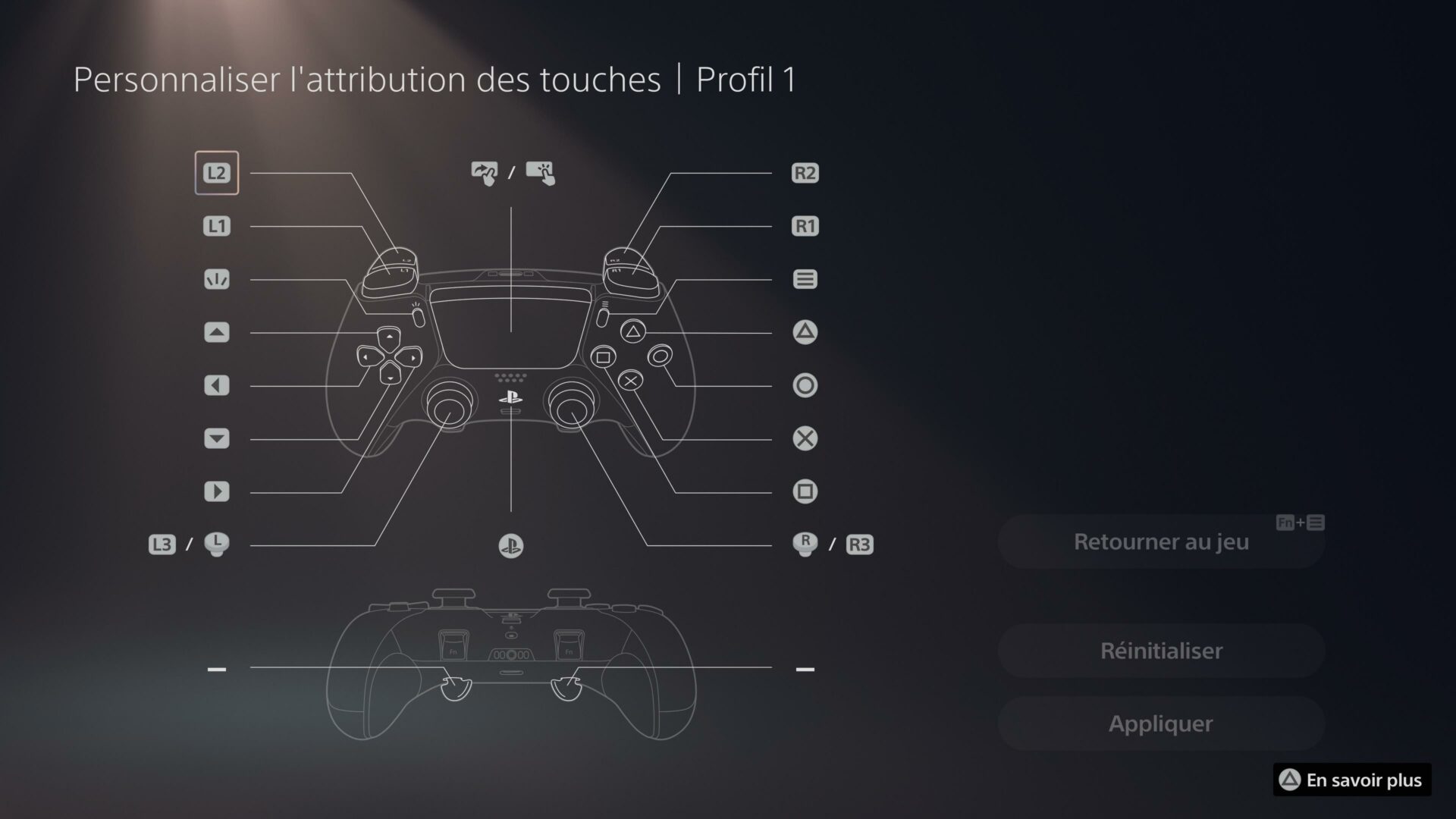 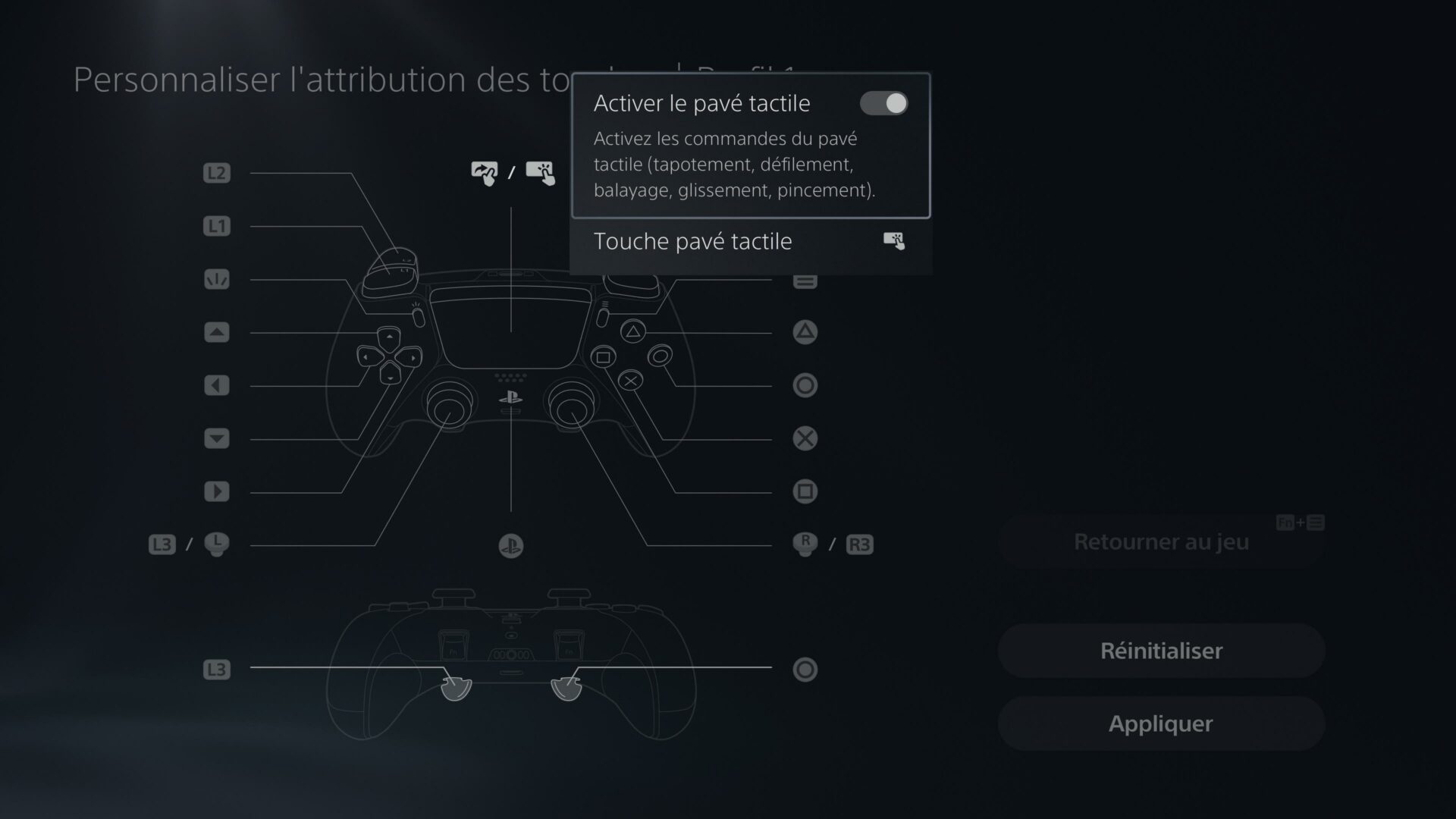 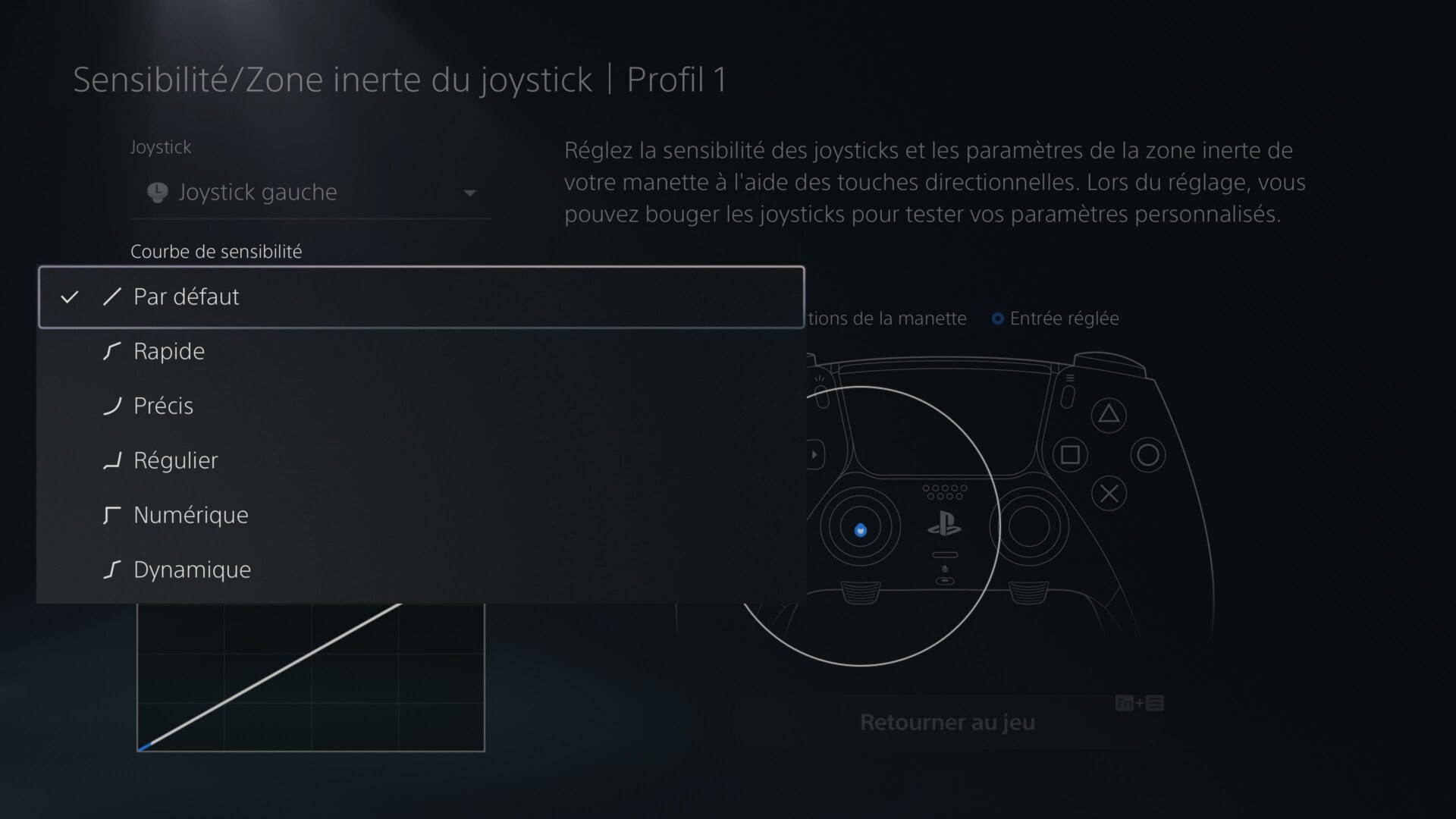 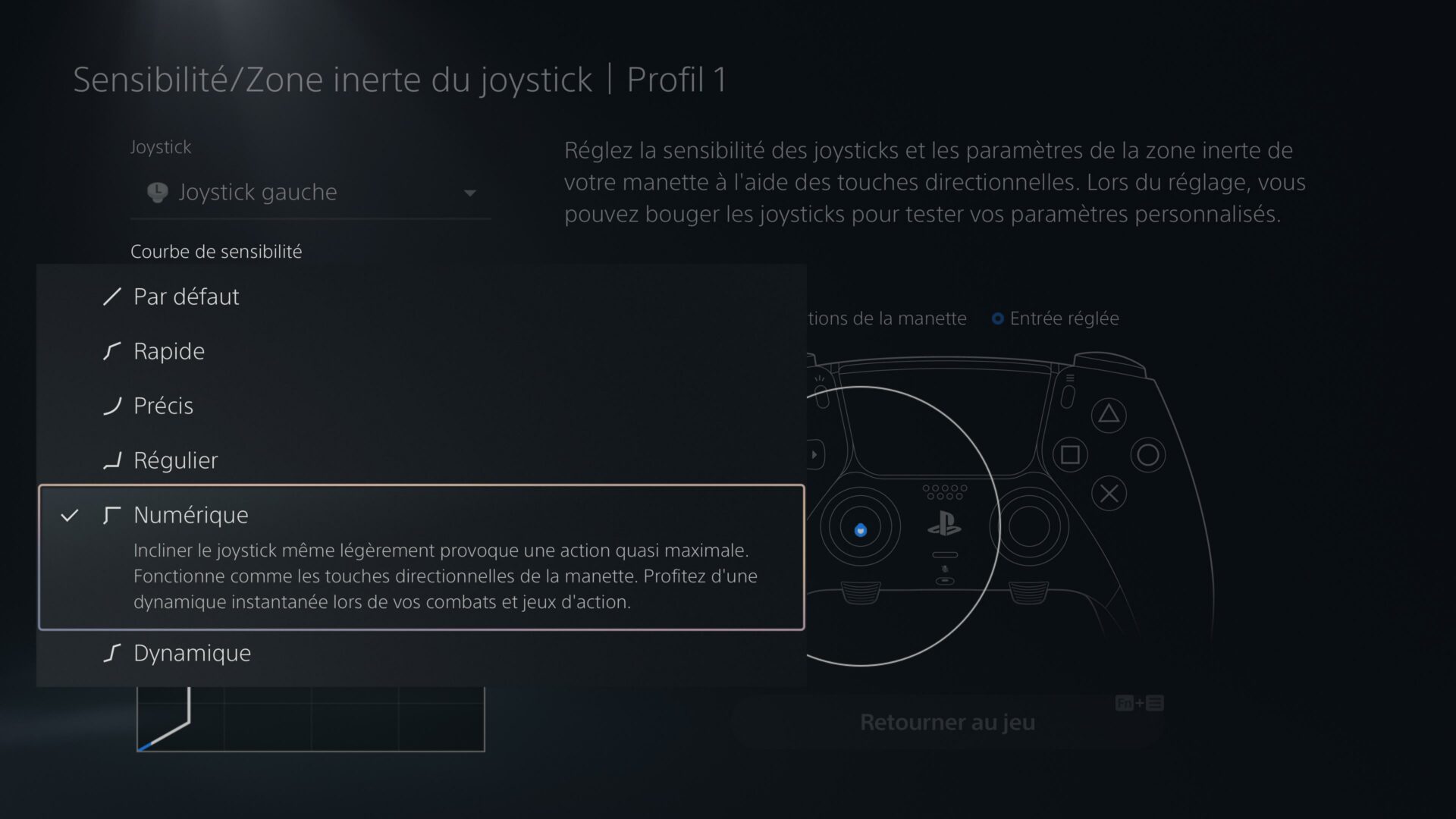 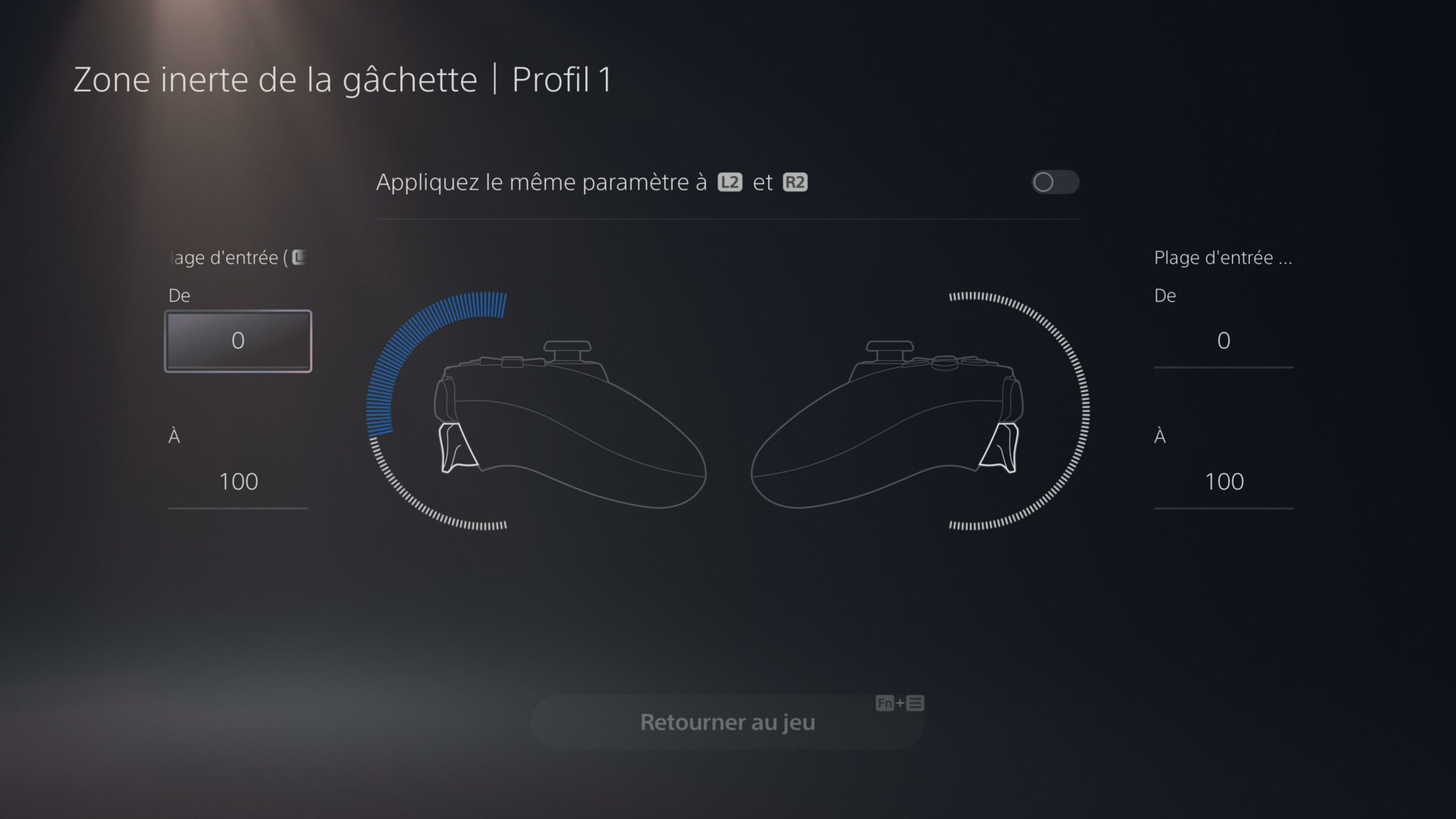 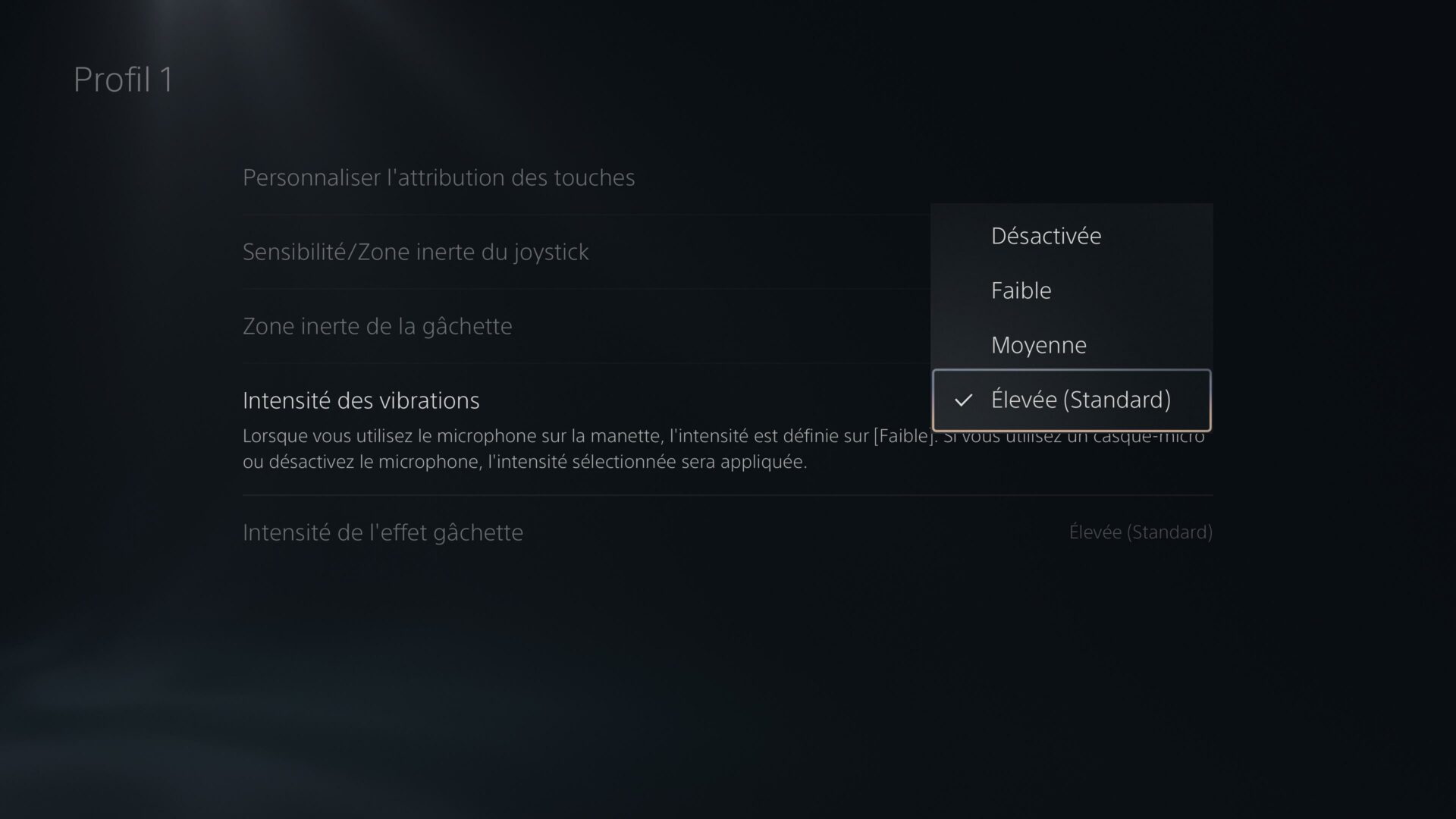 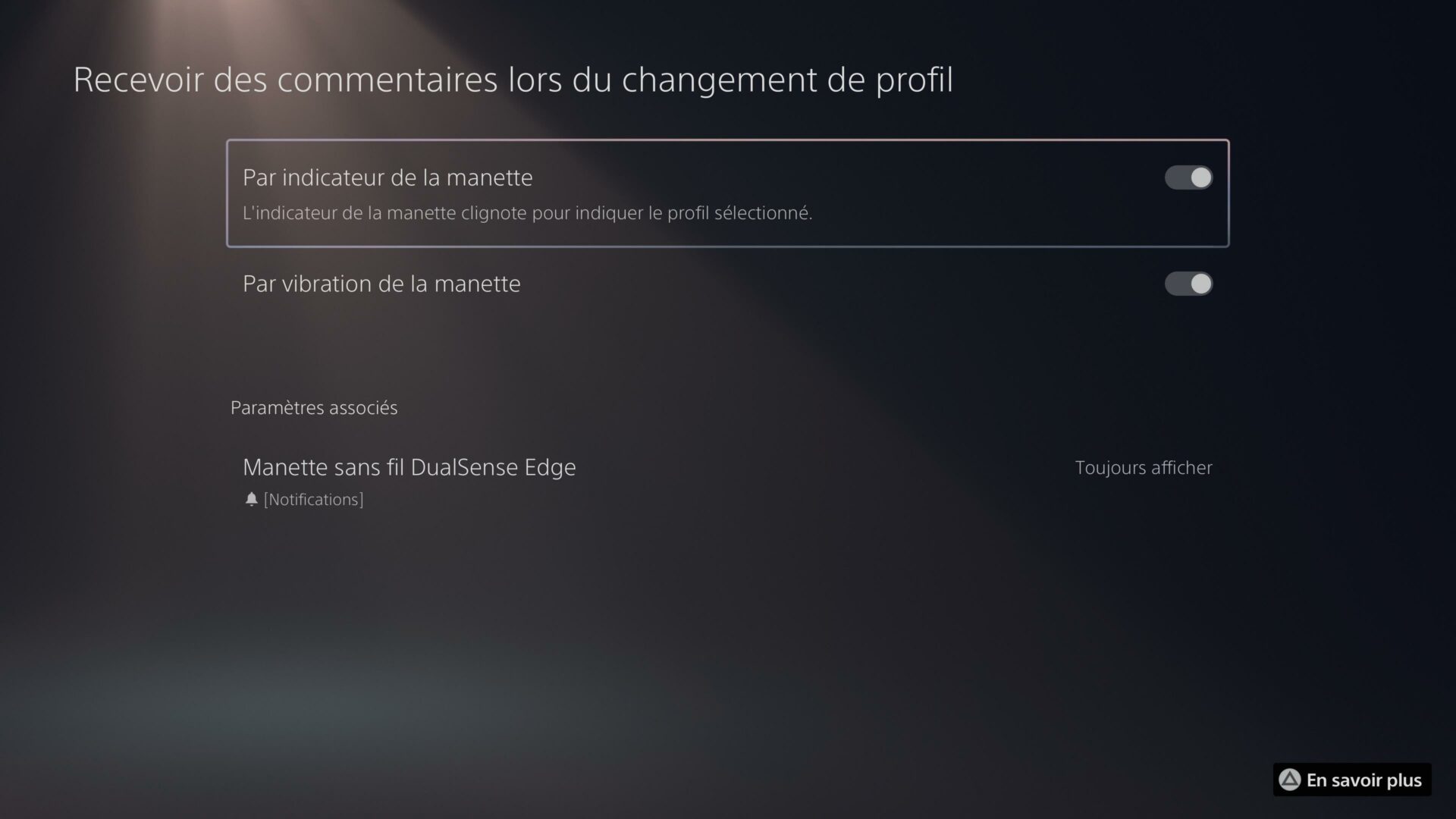 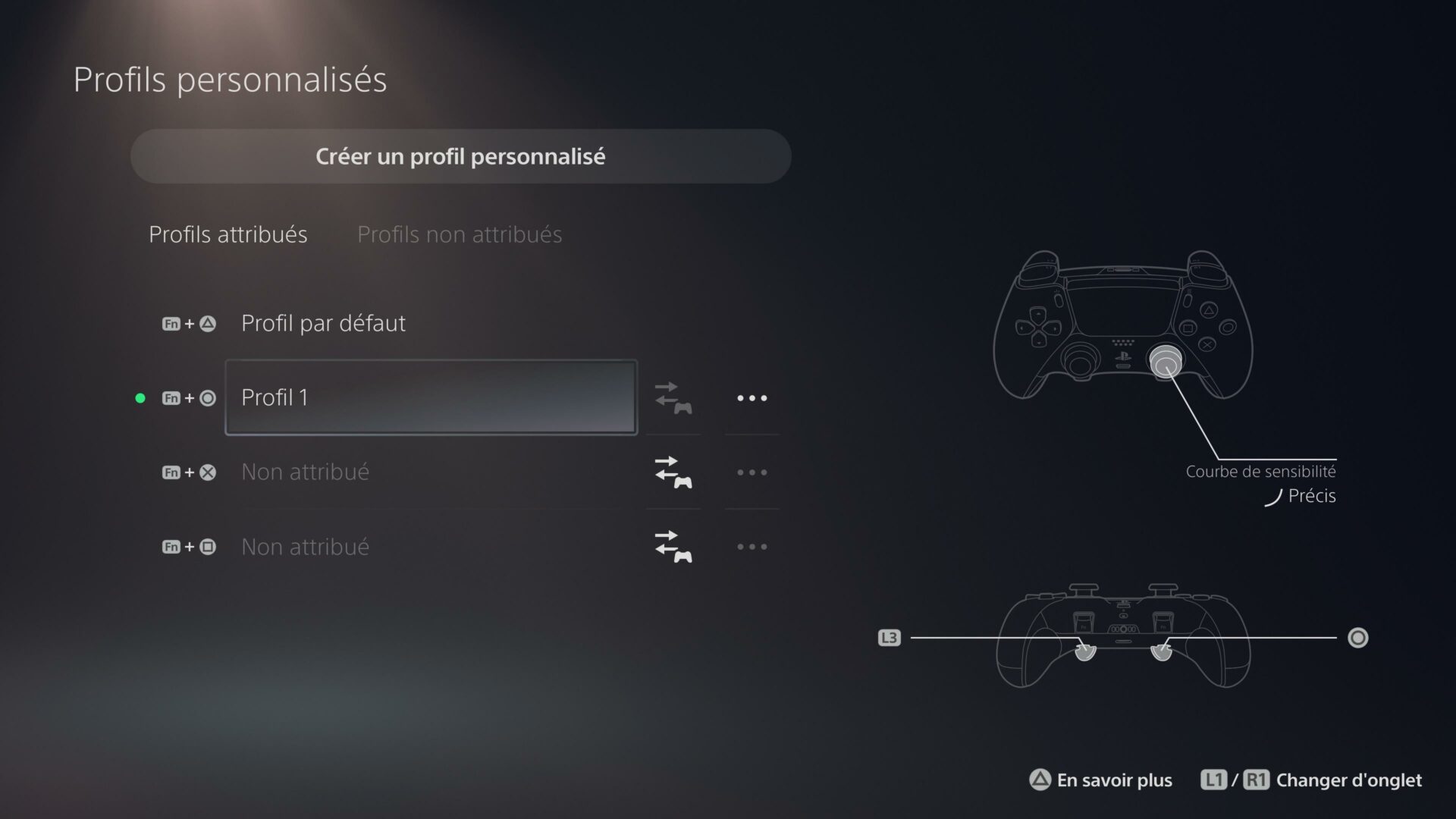 The good news is that all these settings are then saved in the controller’s internal memory. In other words, whether you take it to play with a friend, to a competition or just want to use it on a PC, your settings (and your profiles) will remain available. The annoyance is, on PC, that it is impossible to change them – it must be done from a PS5.

When it comes to PC gaming, the DualSense Edge performs just like its younger sister. Especially since it is quite possible to pair it with Bluetooth, but at the sacrifice of haptic feedback and adaptive trigger which, in compatible games, can only be used in wired mode.

The thorny topic of autonomy

The news leaked a few weeks before the release of the controller: yes, the DualSense Edge has disappointing autonomy… more disappointing than the classic DualSense which, today, is far from brilliant in this regard.

So yes, there’s reason to frown… But should we really hold it against Sony? Not so sure. Take a closer look: essentially, “pro” controllers are meant to offer the best possible performance. Performances that, in any case, can only be achieved using a wired connection to eliminate any form of latency inherent in Bluetooth or a 2.4 GHz wifi connection.

Therefore, yes, wirelessly, the DualSense Edge will run out of breath after five hours of gaming. be provided with a lock to prevent accidental disconnection.

Enough to forgive, even though the Wolverine V2 Pro we’re talking about above claims more than 20 hours of endurance? Not so sure. At least it depends on what you are looking for first and foremost in this type of device.